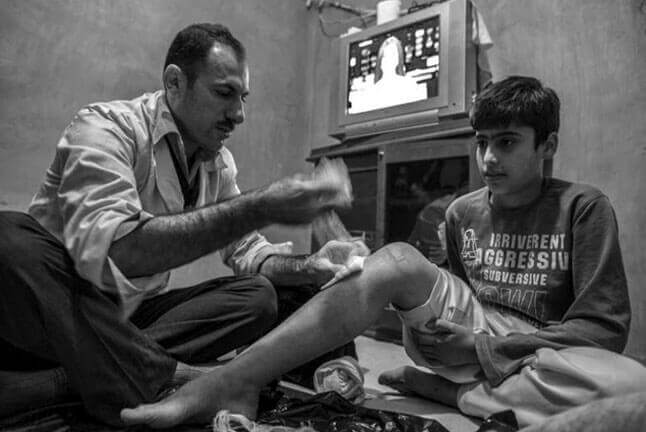 Donation saves refugees from the harsh winter, with overcrowded conditions accelerating the spread of diseases among Iraq’s 220,000 Syrian refugees

UAE, Sharjah, X October 2013: With the bitterly freezing winter of northern Iraq approaching, the already overcrowded camps have reached breaking point. This has prompted the Big Heart Campaign to intervene with a US$2 million donation for life-saving shelter. The donation – which was presented on behalf of the campaign’s donors by the patron, Her Highness SheikhaJawaherbint Mohammed Al Qasimi, UNHCR Eminent Advocate for Refugee Children -will put roofs over the heads of 600 families, or about 3,500 grateful beneficiaries.

This will be the first taste of privacy and dignity for families who were forced to share a single tent with several other families. Over 60,000 new Syrian refugees have crossed into Iraq in the past two months alone, bringing the total to over 220,000. With the cataclysmic tragedy in Syria claiming over 100,000 lives, the flood of refugees pouring into Iraq has forced the refugee camps to exceed over 300% of their capacity. Domiz Camp, which was builtfor 15,000 refugees, now accommodates 45,000. Almost overnight, a dusty field has mushroomed into the refugee city ofKawergosk, with apopulation of 12,000 in just a month.

The UNHCR is working day and night, and since mid-August it has distributed over 5,000 family tents which more than 30,000 refugees now call home. However with very little food, water, healthcare and washing facilities, the camps are a ticking time bomb which only more donations can defuse. This makes the Big Heart Campaign’s $2 million such a lifesaver, asthe UNHCR will now be able to expand the campsites to serve 1,200 families.

One of the camp residents, affectionately known as “Doctor Hassan”, narrates his heartbreaking story: “In 2006 I treated Iraqi refugees in Syria,but I never imagined that one day the roles would be reversed and I would be a refugee myself in Iraq. But the Iraqi people are repaying me with kindness, which shows that we should always be generous to those who are suffering – because you never know how your actions will touch others’ lives, and how those people will one day touch your life.”

Illustrating the dangers faced by refugees when crossing borders, Hassan reveals: “When I fled Syria in May, I was with my wife and two children – including an infantwho was just 20 days old. We reached a village on the Syrian-Iraqi border, and had to find a smuggler who could sneak us illegally into Iraq. The smugglers charged me US$1,100 to cross the border.”

Given that the refugees often have nothing but the clothes on their backs, this amount could be their entire life savings. Yet they have no choice, as their families’ safety is worth all the money in the world to them. Considering that there are over 220,000 refugees who crossed into Iraq, these smugglers who are profiting from the war could have madeover US$240 million from Syrians who are virtually penniless.

Now Dr Hassan treats fellow refugees in the camps, explaining: “With the arrival of winter, the most common cases are respiratory problems and joint pains. The overcrowding makes diseases spread like wildfire from one family member to another, and then from one tent to another, until we have a camp-wide epidemic. Sadly, children’s weaker immune systems – added to their poor nutrition – leaves them defenseless. New refugees also suffer more because of the change in diet and environment. Our most urgent needs are warmer winterized housing, rather than tents. Kerosene would not only give us warmth, but also dry the moisture and kill bacteria, thus reducing cases of diarrhea.”

However, in a trait which is becoming typical among Syrian refugees, Dr Hassan looks on the bright side and is grateful for the little he has: “As terrible as our situation is, those who are back in Syria can’t even get this medical treatment – for cancer, chronic diseases and other conditions. My favorite part of this job is simply seeing patients smile. Last week I treated an old lady, and afterwardsshe insisted on hosting me for lunch – even though she herself barely had enough to eat. It’s generosity like that which gives you hope to carry on living.”

UNHCR’s Representative in Iraq, Claire Bourgeois, commented: “The timeliness of this generous contribution of $2 million from the Big Heart Campaign will improve access to healthcare facilities for Syrian refugees and prepare them to cope with the approaching winter in northern Iraq. This will have a direct impact on the quality of life for Syrians in Iraq, particularly for vulnerable families living within and outside camps as well as local communities bearing the burden of the crisis.”

The US$2 million donation is part of a series of substantial donations being made by HH SheikhaJawaherbint Mohammed Al Qasimi on behalf of the Big Heart Campaign, in order to impact hundreds of thousands of Syrian refugees in Lebanon, Jordan, Iraq and Syria itself.