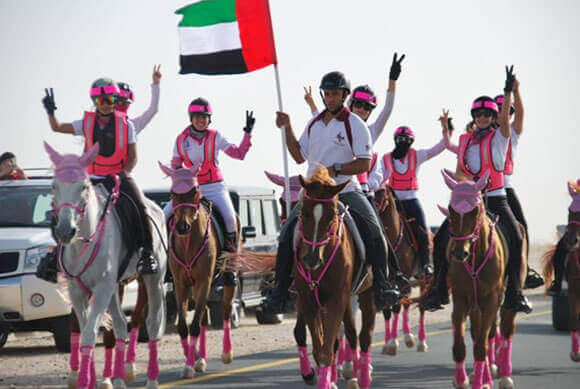 When you watch the news you usually only see the dark side of humanity: wars and suffering, brother against brother, neighbor against neighbor, inflicting unspeakable atrocities on each other. But I prefer to focus on the good side of humanity: the volunteers who give up their high-paying jobs and travel halfway around the world to help refugees. The angelic little girls and boys from Sharjah who donate their prize money from school to help other boys and girls in Syria.The busy mothers with four or five children who sacrifice their time to join a walk for cancer awareness. These people help others not because they share the same religion, same nationality or same race… but simply because we share the same earth as fellow human beings.

I believe that it is this spirit that unites us all to do our share in reducing the suffering of humanity. My focus has always been children as they are the most vulnerable, sowe must shield them from the horrors of natural or man-made disasters as well as terminal illnesses. I set up “SalaamYaSeghar” (SYS) to benefit children-related charity campaigns. The first SYS initiative, SYS-Palestine Fund, helped children in the war-torn communities of Palestine. Thisfund donates to sustainable initiatives that improve the lives of Palestinian children. The SYS head office also oversees the SYS-Refugees campaign to help Syrian refugee children.

I am greatly moved by the donors who have helped us raise millions of dollars and touch millions of lives – whether for cancer patients in the UAE, refugees from Syria and Palestine, the war-ravaged beaches in Lebanon, impoverished women in Somalia and many others.

My most recent role is to serve as the world’s first Ambassador for Pediatric Cancer under the World Cancer Declaration. When the UAE became a newborn nation 42 years ago, cancer was considered a very rare disease that mostly affected Western countries. Four decades later, cancer has mutated into the UAE’s second highest cause of death. Tragically, more and more of these victims are defenseless little children. The unsolved mystery for UAE medical experts is: are more people getting cancer because of our modern lifestyles? Or is it simply that more people who already had cancer are now being diagnosed due to improved techniques?

I am honored to be chosen as the world’s first Ambassador for Pediatric Cancer, as it is an opportunity to make a difference in the lives of the innocent children inflicted by this dreaded disease. SYS for Childhood Cancer works hand-in-hand with Friends of Cancer Patients (FOCP) to raise awareness and funds for this cause.

However, hope needs to be supported by knowledge, so we have launched various awareness initiatives to educate the nation on how to minimize the risks of getting cancer. Early diagnosis has proved to be a lifesaver, whereas for some patients a tiny tumor that was left undiagnosed has quickly spread to cause fatalities.

Rather than only focusing on the many people dying of cancer daily, at FOCP we prefer to focus on the many success stories, such as the hundreds of UAE children who have recovered and no longer have any traces of this disease in their bodies. About 60% of the cases are cancer of the blood (leukemia and lymphoma) as well as brain tumors, and we work closely with hospitals and care givers to provide the attention and care such cases require.

I am always flattered when I am affectionately referred to as the ‘Big Heart’, but I believe everyone has a big heart – now we just have to show it by turning our sympathy into actions. I am amazed by the remarkable similarities between children affected by war in Syria or Palestine, and those affected by cancer. Young cancer patients wonder why they can’t play or go to school like other children, in the same way that refugee children wonder why they no longer have a home or a parent. Children can’t understand cancer in the same way they can’t understand war. In both cases it is preventable, and in both cases we can end it if we try.

Cancer is still not fully understood by researchers and doctors, so there is no way the children themselves can understand it. It is the most heartbreaking thing for a parent to accept that their innocent little boy or girl may not survive, and their life might end before it has even begun. But I am inspired because whether they are in a refugee camp or cancer ward, children have an amazing ability to look on the bright side and enjoy each day to the fullest. This positive attitude should be adopted by all of us who are working to help them.