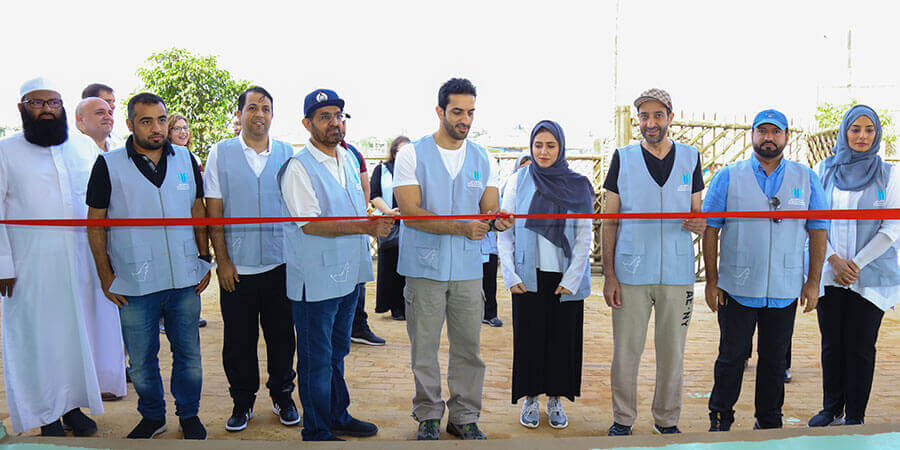 The AED 3 million donation announced by the Sharjah Media Corporation (SMC) earlier this year, through its public fundraising initiative on healthcare projects, to build a hospital for the long-suffering Rohingya refugees in the Kutupalong camp situated in Cox’s Bazar district of Bangladesh, has come to fruition.

The 100-bed capacity hospital is expected to serve 7,200 beneficiaries in its first year. It has been built by Médecins Sans Frontières (MSF) – Doctors without Borders in collaboration with the Sharjah-based international humanitarian organisation, The Big Heart Foundation (TBHF).
Sheikh Sultan bin Ahmed Al Qasimi, Humanitarian Envoy of TBHF, and Chairman of Sharjah Media Council (SMC), inaugurated the facility on Friday in Kutupalong camp. It aims to offer lifesaving aid and vital health care to around 140,000 displaced Rohingyas including a sizeable number of infants and young children.
Following the facility’s inauguration, Ahmed Al Qasimi and accompanying delegation went on an inspection tour of the various units, and were told about the 24/7 medical services offered at the hospital. They also learned about the hospital’s preparedness to contain infectious diseases and emergencies.
The hospital is equipped with intensive care units, pediatric and maternity wards, mobile clinics, and other units including support services for sexual assault victims – all delivered by a medical team from Doctors without Borders. The medical facility houses a water purification system, which will cater not just to patients, but to the area’s residents exposed to water-borne disease outbreaks such as cholera, acute watery diarrhea, typhoid, and others.
The hospital offers a much-needed response to the immense health needs of the Rohingya refugees by strengthening the area’s current infrastructure in responding to emergencies in the wake of epidemiological conditions or natural disasters. It is also equipped with hi-tech warning systems to detect infectious diseases, and respond to and controls outbreaks. The Sharjah delegation included Sheikh Saqr bin Mohammed Al Qasimi, Chairman of Sharjah Sports Council; HE Mohammed Khalaf, Director General of Sharjah Media Corporation; Mariam Al Hammadi, Director of TBHF; HE Reem BinKaram, Director General of NAMA Women Advancement Establishment (NAMA); Tariq Allay, Director of Sharjah Government Media Bureau; Nada Al Lawati, Executive Board Member of NAMA; and Marwan Al Zaeem, Founder and CEO of Crown Construction.
The delegation visited a host of Rohingya families residing in the refugee camp, where they saw first-hand their plight from close quarters, understood the harsh reality the dire need for practicable humanitarian efforts to fill existing gaps.
Sheikh Sultan bin Ahmed Al Qasimi said: “The Rohingya refugees are among the most suffering communities anywhere in the world today. With the inauguration of this hospital, we have extended the compassion of Her Highness Sheikha Jawaher bint Mohammed Al Qasimi, Wife of His Highness the Ruler of Sharjah, to several in dire need. Also, TBHF has reached a new milestone in furthering the UAE’s historic legacy of selfless service to the most vulnerable communities worldwide.”
The TBHF Humanitarian Envoy continued: “The AED 3 million funding for the hospital which was collected through public fundraising initiative for healthcare projects goes to show the emirate’s and the UAE’s integrated efforts to spreading our humanitarian message worldwide. The hospital mirrors the solemn humanitarian bonds that connect the UAE to the rest of the world.”
HE Mohammed Khalaf, Director General of SMC, said: “Since inception, SMC has taken its role in media and communications to unearth ground realities, and take humanitarian messages to people. Inspired by the vision of His Highness Sheikh Dr. Sultan bin Muhammad Al Qasimi, Supreme Council Member and Ruler of Sharjah, and His Wife, Her Highness Sheikha Jawaher Al Qasimi, SMC has unified the efforts of Sharjah’s organisations and individuals to achieve humanitarian development around the world.
“As a media institution, we have a big humanitarian duty that stems from our authentic Arab and Islamic values that guide us to lend a helping hand to people in need.”

Mariam Al Hammadi, Director of TBHF, said: “The inauguration of the hospital follows a visit we paid earlier this year to Rohingya refugee camps in Bangladesh where we assessed the refugees’ overwhelming need for healthcare and basic necessities.
“We extend our heartfelt appreciation to SMC for responding to our humanitarian appeal and collaborating with us for this noble cause. By doing so, SMC has set an example of fulfilling a humanitarian commitment we all have towards the world.
The Rohingya refugee issue is one of the fastest growing crises in the world, where around
1 million refugees are suffering from the lack of basic necessities of life and living an unhealthy environment that faces rapidly rising growth rate of epidemics and communicable diseases.