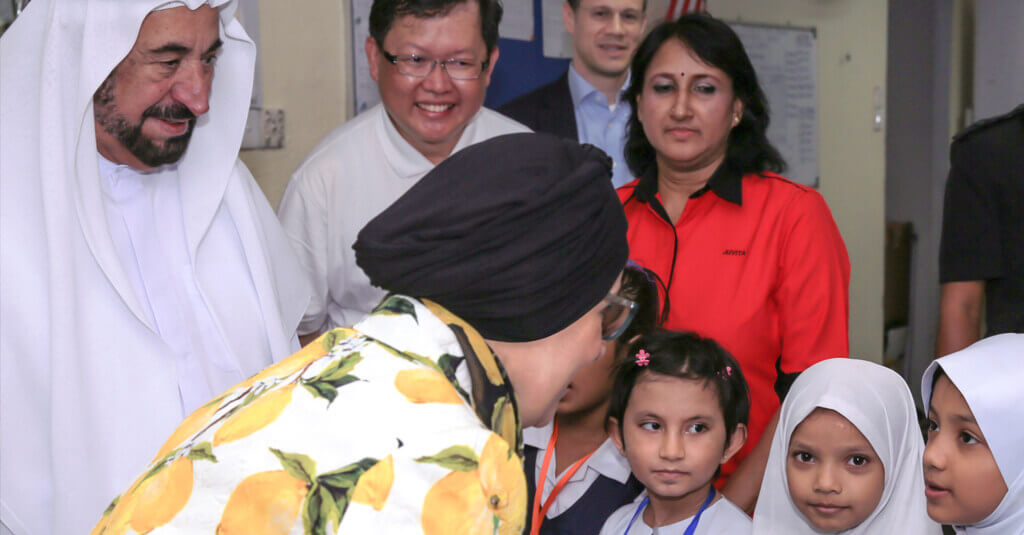 1. Considering the number of humanitarian initiatives, campaigns and programmes the Emirate of Sharjah has introduced, it seems only natural that it should launch an award for refugee advocacy and support. What does the award seek to achieve?

Every armed conflict includes humanitarian casualties and often, those most affected are the civilians who have been forced to flee their homes, fearing for their lives and looking for refuge somewhere else in the world. Every step of the way refugees will face some of the greatest challenges and harshest conditions in their lives.

In view of this, Sharjah could not stand by, while hundreds of thousands of refugees are suffering in silence, waiting for a helping hand and a kind heart to help relieve them of their pain. Therefore, I launched a series of leading humanitarian relief projects and charity campaigns, under the direct guidance and generous patronage of His Highness Sheikh Dr. Sultan Bin Muhammad Al Qasimi, Member of the Supreme Council and Ruler of Sharjah, to reinforce relief efforts, which targeted disadvantaged children, as part of the continuous efforts to ease the harsh living conditions and try to give them hope for the future.

The launch of the Sharjah International Award for Refugee Advocacy and Support, which is organized by TBHF in collaboration with the United Nations High Commissioner for Refugees (UNHCR), marks a new era of generosity and sacrifice that fits perfectly with the 2017 goals of the ‘Year of Giving’. The award also complements the efforts undertaken by the UAE and Sharjah in the relief of vulnerable people by supporting outstanding humanitarian initiatives aimed at improving the lives of hundreds of thousands of refugees and displaced individuals and families across the world.

Undoubtedly, the act of giving and dedication to improve the lives of people who have been displaced from their homes because of wars and upheaval will greatly reinforce the principle of ‘excellence in giving’. The award is also fully consistent with the UAE’s approach of kindness, philanthropy and commitment to solidarity with disadvantaged people. The award gains a special importance due to its role in endorsing the noble values of charity and solidarity as well as inspiring other people in the world to follow suit and serve the cause of refugees.

2. How has His Highness’s great role in humanitarian work contributed to inspiring you to launch the Sharjah International Award for Refugee Advocacy and Support?

His Highness Sheikh Dr Sultan bin Mohammed Al Qasimi is a wise and visionary leader who has always put the issue of alleviating people’s suffering at the top of his priorities. He has launched several humanitarian initiatives, both locally and globally. These initiatives continue to achieve tangible results in terms of human development and supporting the needy. This is apart from his support for refugees in various countries across the world, particularly Syria, Palestine, Iraq, Rohingya refugees, and many others.

His Highness’s vision has inspired humanitarian work not only in Sharjah but across the UAE as he laid a clear roadmap for relief projects, which have a sustainable long-term tangible results, and meets the needs of all age groups. Today, we are following in the footsteps of His Highness, inspired by his noble actions in alleviating human suffering. Leading by his example, we have launched the Sharjah International Award for Refugee Advocacy and Support – which is initiated under his guidance and patronage to help alleviate the plight of the most vulnerable people and ensure a better life for them.

3. Would it be right to say that the launch of the award at this critical time is in response to changes and crises facing the Arab region and the consecutive waves and influx of refugees?

It is no secret that our Arab region is witnessing devastating armed conflicts, some of which have been going on for more than five years. Many have led to enormous human tragedies and destroyed the lives of hundreds of thousands of people. Those people have endured oppression, expulsion, death and displacement through no fault of their own and found themselves victims of conflicts in which they have played no part.

The UAE, under the leadership of President His Highness Sheikh Khalifa bin Zayed Al Nahyan was always at the forefront of providing relief and aid. The nation launched a series of relief campaigns since the very first moment of the crisis, and created campaigns to ease the great hardships of displaced families.

It provided the basic needs of water, food, healthcare, education and shelter, and worked with other countries, international bodies and UN organisations to ensure a more dignified life for refugees and the underprivileged.

The award is a continuation of the approach to giving and goodness embraced by the UAE and direct response to the current conditions. It aims to honour individuals and organisations who have made contributions to ease the suffering of refugees through ambitious humanitarian initiatives and charity projects, while inspiring others to follow suit.

We have shown that success in tackling the refugee situation is possible, but it is vital for us to continue to create new mechanisms of humanitarian work.

4. Given that the award seeks to improve the lives of refugees and displaced persons in Asia, the Middle East and North Africa, is there a plan to expand its scope to include other regions?

According to United Nations reports, 65.3 million individuals were forcibly displaced from their homes worldwide by the end of 2015, that’s an increase of nearly 5 million refugees since the beginning of the year, and the largest annual increase since the Second World War.

Bearing in mind that refugees from Syria, Afghanistan and Somalia make up half the number, we realise the importance of concentrating efforts on Asia, the Middle East and North Africa.

This is exactly the reason why the award, in its first edition, is focussing on honouring outstanding efforts in these regions specifically. The MENA region is home to the most important humanitarian initiatives and charity projects in the world.

The award is still new and we will definitely see significant changes as it develops. So it is likely that the award will include new categories in its successive editions.

5. The award will focus on honouring those who have implemented effective projects and initiatives which have provided the needs of refugees and displaced people. How will the award contribute to the continuity of such projects?

Since the plight of refugees has increased so dramatically worldwide, many initiatives and humanitarian projects have had a genuine impact on refugees in Asia, the Middle East and North Africa. They have established not only relief for today, but have prepared for future challenges.

These projects have succeeded in providing sustenance but equally as important, they have helped them to regain hope and look ahead to a brighter tomorrow. They have supported refugees with financial needs as well as morally. The struggle remains, but the success stories continue to grow.

It is our duty to thank and recognise those who have made distinguished humanitarian efforts for refugees and displaced families. This is why the award honours those who have left their humanitarian imprint. We hope that this will serve as an additional incentive for people to continue working in lighting the path for refugees and the people in need around the world.

6. How important are refugee children in allotting the award?

Children are the worst affected group by conflicts and wars. Their age and inexperience make them the weakest segment of society and the worst affected by disasters, conflicts and atrocities. This is why we have been more active in taking practical steps to provide care for refugee children. In 2007, we launched the ‘Salam Ya Seghar’ initiative to provide aid and assistance to Palestinian refugees.

This was followed by the launch of the Big Heart campaign, which was transformed into a global humanitarian foundation. Since then, we have expanded our areas of interest and support for refugee children to include education alongside financial support. We have made great strides in this aspect, as we provided education to Syrian refugee children whose schools were closed due to the ongoing conflict.

In October 2014, Sharjah hosted the first edition of the ‘Investing in the Future’ conference, which was organised by TBHF to discuss the issue of refugee children in the MENA region.

The conference concluded with the declaration of ‘Sharjah Principles’ that provided a general framework to provide protection for refugee children affected by wars. In its direct and quick response, the Secretary General of the League of Arab States adopted the ‘Sharjah Principles’ after discussing them with the Big Heart Foundation, as well as a number of countries and representatives of international organisations and civil society, and Included them on the agenda of the Arab Childhood Committee, the League of Arab States.

In line with our vision that puts refugee children at the top of the list of our priorities, the award looks forward to receiving entries from humanitarian projects and initiatives dedicated to supporting this category and making a positive change in children’s lives.

When we launched the award, we meant to highlight considerable humanitarian efforts made by both individuals and organisations to end the suffering of refugees and honour the most distinguished efforts, hoping that it will encourage them to carry on with their relief operations.

Although the idea of expanding the award to include various aspects of humanitarian work is interesting, there are many initiatives dedicated to honouring noble humanitarian work worldwide. Therefore, the Sharjah Award seeks to reward a more specific field of humanitarian work. The award mainly focusses on honouring efforts related to helping refugees and grants them with the recognition they deserve.

8. How will the award contribute to inspiring and motivating individuals and organisations to launch more creative and innovative initiatives to improve the lives of refugees?

Recognition is an important incentive for any of us to achieve more, and this applies to every aspect of our daily lives. The appreciation of individuals and groups encourages everyone to work harder.

This is why the award, in its essence, aims to honour innovation and creativity in humanitarian work, and recognise projects that differ from others.

9. Finally, what does the launch of this award mean to your Highness personally, and what is the future vision for it?

Over the past years, the relief and humanitarian work in Sharjah has witnessed significant developments. The Sharjah International Award for Refugee Advocacy and Support is the product of years of field experience carried out by our foundations and the generous Emirati youth in areas most affected by the refugee crisis around the world.

The Sharjah Award is just one of the success stories of the inspiring humanitarian vision of His Highness Sheikh Dr Sultan bin Muhammad Al Qasimi who has set a clear roadmap of relief and charitable initiatives. It is a leading move to strengthen the emirate’s position on various international forums, providing a global platform to launch humanitarian initiatives that have positively impacted the lives of hundreds of thousands of people.

The launch of the award in the first days that followed the declaration of the ‘Year of Giving’ illustrates the ambitious values of sacrifice and goodness within the emirate and importance of instilling these values in young people and future generations.

We look forward to more submissions from humanitarian organisations and individual projects, and hope that it will serve as a global call to launch new incentives in many other parts of the world.