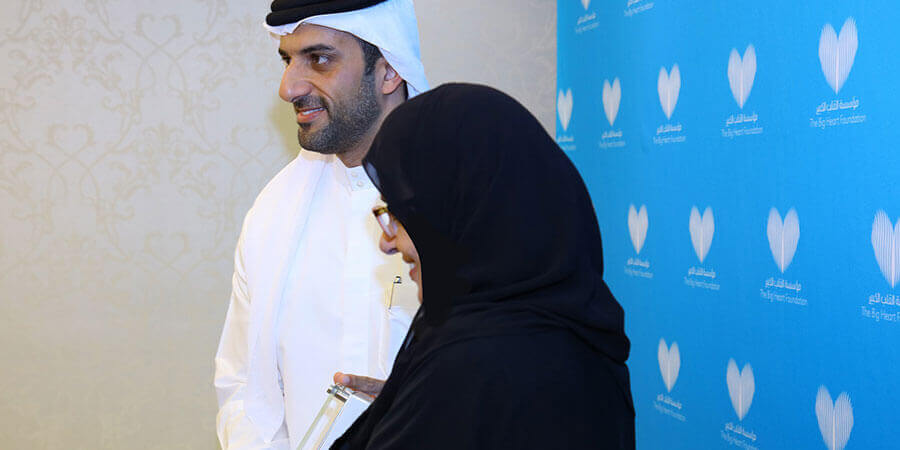 Her Highness Sheikha Jawaher bint Mohammed Al Qasimi, Wife of His Highness the Ruler of Sharjah and Chairperson of The Big Heart Foundation (TBHF), announced the appointing of Sheikh Sultan bin Ahmed Al Qasimi, Chairperson of the Sharjah Media Council (SMC), as the Foundation’s Humanitarian Envoy. The appointment was announced at the Executive Office of Her Highness Sheikha Jawaher Al Qasimi

The announcement came as a recognition of Sheikh Sultan bin Ahmed Al Qasimi’s status and his ability to raise community awareness about the importance of humanitarian action.

As TBHF’s Humanitarian Envoy, Sheikh Sultan bin Ahmed Al Qasimi will contribute to mobilising community support both regionally and internationally, and to advocate for refugees and the less fortunate around the world. He will also assist TBHF with building stronger humanitarian partnerships in the UAE, the GCC region and beyond. Sheikh Sultan bin Ahmed Al Qasimi will be heading TBHF delegations during local, regional and international conferences and meetings, and will be present at the foundation’s aid and relief projects around the world.

Her Highness Sheikha Jawaher Al Qasimi reiterated her trust in the resolute spirit of Sheikh Sultan bin Ahmed Al Qasimi, and highlighted that this was a significant step forward in developing the humanitarian objectives of TBHF. Her Highness pointed out his noble efforts in using the SMC platform to reach out to their large viewership, with messages of community action that is central to saving lives, alleviating suffering, and maintaining human dignity of the less fortunate besieged by crisis and conflict.

Her Highness underscored that, due the unprecedented escalation of conflict and unrest in many parts of the world, this makes it incumbent on TBHF to make greater efforts and maximise their relief network, so as to be able to effectively aid the vulnerable, especially women and children.

Her Highness Sheikha Jawaher Al Qasimi, said: “Through our Humanitarian Envoy, we will use media to better highlight the humanitarian issues that deserve more support and community backing. The step aims to achieve greater levels of awareness by projecting the real situation in crisis-ridden areas, so we can help mobilise large scale community support that will be sustained until their plight comes to an end. We also aim to assure them that the international community is working tirelessly to alleviate their suffering and build them a better and brighter future.”

For his part, Sheikh Sultan bin Ahmed Al Qasimi, said: “I am honoured to have the trust of Her Highness Sheikha Jawaher bint Mohammed Al Qasimi, and be one of the voices of TBHF, which has been doing commendable work in alleviating their sufferings of innocent people being destroyed by war, hunger violence, and crisis.”

He continued: “My appointment as TBHF’s Humanitarian Envoy is a humanitarian devotion and responsibility that I am proud to bear. I look forward to facilitating the implementation of TBHF’s many humanitarian initiatives that have been touching people’s lives and bringing them happiness and hope regardless of their nationalities and faiths.”

He took the opportunity to call on all individuals and communities to do their part in fulfilling their responsibility towards the global human community, and by contributing towards protecting their basic rights to food, shelter, education, liveable environment, and peace.

The TBHF Humanitarian Envoy underscored that it was important to further the Foundation’s ongoing efforts as they reflect a fundamental aspect of Sharjah’s vision, which is to truly make a difference to the lives of the less fortunate people worldwide. Sheikh Sultan bin Ahmed Al Qasimi emphasised the pivotal role of media in promoting humanitarian issues and raising awareness about them among the communities, as well as rallying support in their favour, pointing out that the impact of media has become one of the most influential tools to support refugees and less fortunate people, and ensure the sustainability of humanitarian mobility.

As Member of the Sharjah Executive Council (SEC), and Chairperson of the SMC, Sheikh Sultan bin Ahmed Al Qasimi is one of the most influential personalities in the community, known for his efforts in charitable fields in the UAE. He is always seen lending his support to humanitarian initiatives, particularly the more serious ones involving refugees, children, women and the youth. He is an advocate of sustainable development, and works to engage people in investing in their capabilities into such projects.

In June 2015, Her Highness Sheikha Jawaher bint Mohammed Al Qasimi launched TBHF, marking World Refugee Day. It followed the decision issued by Her Highness to transform The Big Heart Campaign into a global humanitarian foundation. The move was aimed at redoubling efforts to help refugees and vulnerable people worldwide. The new foundation furthered UAE’s rich portfolio and long record of humanitarian initiatives, and enhanced its reputation regionally and globally.