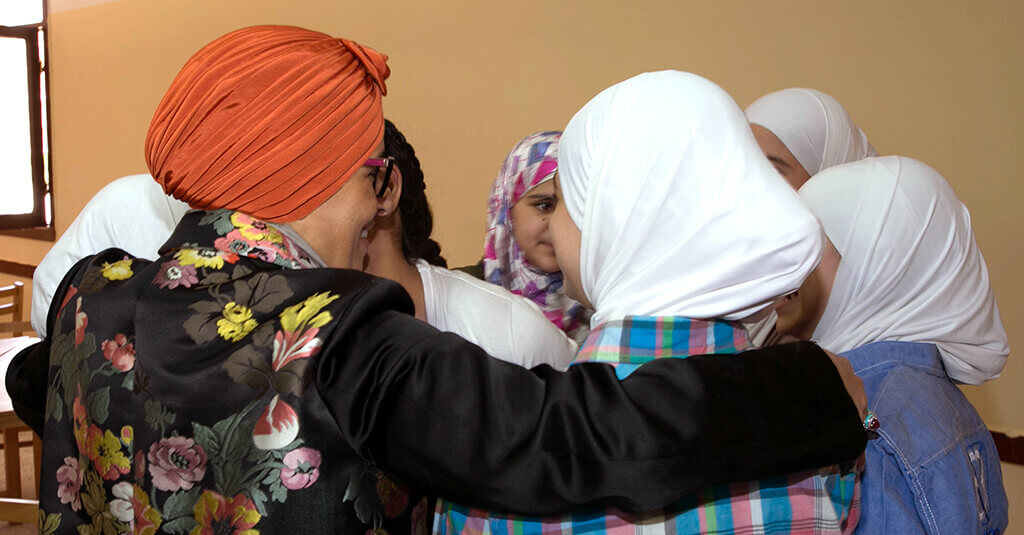 She visits 6th of October school and TadamonEgyptian Refugee Council

“Refugees in the Arab world is an issue for all Arabs, their future is our future” Sheikha Jawaher

Sharjah, May 12, 2015:Her Highness Sheikha Jawaher bint Mohammed Al Qasimi, wife of His Highness the Ruler of Sharjah, UNHCR Eminent Advocate for Refugee Children, called for action during her visit to Tadamon Egyptian Refugee Council, refugee schools and the UNHCR Office in Cairo.
Her Highness Sheikha Jawaher Al Qasimi said that the purpose of her visit was to follow up on the development of systems put in place to provide support for refuge children and comes amidst the backdrop of the huge influx of refugees fleeing the four-year conflict in Syria.
Her Highness said, “The issue of Syrian refugees is one of the most tragic events in human history and without collective Arab and international effort, their plight will continue to deteriorate, leading to grave consequences, not only for the refugees but for the Arab community as a whole.”
Her Highness Sheikha Jawaher pointed out that the conflict in Syria has led approximately four million Syrians to flee over the past four years, of which 3.9 million are registered with the UNHCR, but many are not. She added that this has placed tremendous pressure on Syria’s neighboring countries, which are trying to provide basic humanitarian aid such as shelter, water, electricity and food.
“The refugee issue will not be resolved by remembering their humanitarian suffering and talking about their plight. It can only be resolved through the collective effort of the international community. We need to develop Arab and international systems and put measures in place to provide protection to refugees. The situation has become very serious with an increasing number of refugees and ongoing crises in a number of Arab countries, the refugee issue can affect the future of the Arab world and its development,” Her Highness said.
Sheikha Jawaher was speaking during her visit to The 6th of October School in the 6th Of October City which consists a large group of Syrian refugee students, and Tadamon Egyptian Refugee Multicultural Council, and the UNHCR Office in Cairo. The visit comes in part of Sheikha Jawaher ongoing efforts to support and advocate children refugees, especially with regards to issues of shelter, health and education. She also discussed the conditions of refugees in Egypt and other countries in the region.
H.H Shekha Jawaher was received upon her arrival at the school by Ambassador Tariq Maati, Assistant Foreign Minister for Refugees and Migration, Dr ButhainaKishk, Director of the Directorate of Education in Giza, and Elizabeth Tan, UNHCR Regional Representative in Cairo. She was also greeted by Dr Yousuf Suleiman, First Undersecretary at Ministry of Education, Mohammed Shawky, Education Representative at UNHCR Office in Cairo, and a number of UNHCR officials and teaching staff at the school.
Sheikha Jawaher inspected classrooms that accommodate over 320 Syrian and Arab refugee students along with 1,000 Egyptian students where she spoke with a group of Syrian refugee students and urged them to pursue education and work hard for the future of their home countries and their greater Arab Homeland, and their own future.
She also listened to a presentation by the school administration about educational services provided to Syrian refugee students, and what does the school needs to develop the quality of education, especially with the growing number of Syrian refugees in Cairo, specifically in Giza.

Elizabeth Tan highlighted efforts by the UNHCR Regional Office in Cairo to provide good quality of education to all refugees in collaboration with the Egyptian Ministry of Education, and foreign donor bodies and organization, most notably the Big Heart Foundation. She underlined Sheikha Jawaher’s role in advocating refugees worldwide and supporting them to enjoy a dignified life and a promising future.

She highlighted that the Arab world is among the five biggest refugee hosting countries in the world in 2014. The Arab region, which comprises 5% of the world’s total population, hosts 53% of the world’s refugees. Currently, Jordan, Lebanon and Egypt top the list of countries that receive refugees, and Her Highness said that it is the duty of the Arab and international community to stand by these hosting countries in shouldering the responsibility to protect and provide for refugees.
Her Highness commended the efforts of Egypt, Jordan and Lebanon for supporting refugees, noting that these countries bear the biggest burden and responsibility towards refugees and provide more than their countries capacity to ensure their protection.
Her Highness Sheikha Jawaher called on the Arab community, including decision makers, non-government organisations (NGOs) and civil society, to take the initiative and support Syrian refugees and ensure their needs are met and that children are protected so that their future and their education can be safeguarded. She added that refugee children need food and shelter, but they also require education and the opportunity to have a brighter future.
Her highness said, “There are more than 600,000 Syrian refugee children who do not attend school. No effort would be fruitful without bearing in mind the need to secure education for all refugee children, education is their future that will help them to pass through into a better and more beautiful world. Education will protect children and save them from the complexities, difficulties, pains and tragedies that forced their migration. By educating refugee children, we save them from falling into the quagmire and the aftermath of wars that may affect them psychologically, causing them to feel bitter and angry and wanting to take revenge, rather than being contributive members involved in the promotion of peace and love worldwide. Education makes security and reconciliation a reality.”
Her Highness Sheikha Jawaher expressed concern that the current conditions in some Arab countries resulted in children living in a desperate situation, spending the most important years of their childhoods as refugees, while others were born as refugees and have never seen their homes. Despite this, she added, Syrian refugees will cope with their situation if the Arab and international community, along with UN organisations and civil society, take some responsibility to help them.
“There is a need to work within a unified Arab and international framework to provide the greatest possible support, avoid the fragmentation of assistance and services and their replication in some areas. Helping refugees in the Arab world is a cause of all Arabs as it determines not only the future of refugees but that of other Arabs as well,” she said.
Sheikha Jawaher also pointed out that the UNHCR is seeking to implement the Sharjah Principles, which were announced at the conclusion of the Investing in Future conference hosted by Sharjah last October. The Sharjah Principles state that all refugee children should have international protection; have their best interests taken as a primary consideration in all matters affecting their well-being and their future, and all refugee children should be registered and documented at birth in countries of asylum.
The principles also state that all refugee children have a right to family unity and should be protected from family separation, as well as have a right to education in a safe environment that supports their developmental needs. They further state that refugee children be protected against all forms of violence, abuse, and exploitation, including child labour, and have access to national systems and services delivered in a protective way, including health and psychosocial support. The UNHCR has circulated these principles to countries across the world to apply them under its supervision.
The United Nations High Commissioner for Refugees (UNHCR) appointed Sheikha Jawaher as UNHCR Eminent Advocate for Refugee Children in May 2013, one of the most distinguished positions in the international humanitarian world. This was in recognition of her tireless efforts to raise public awareness about the problems faced by refugees, a cause she has been devoted to and which is close to her heart. Sheikha Jawaher’s commitment to alleviating the suffering of women and children affected by war, and her eagerness to launch life-saving and life-changing initiatives, as well as to rally humanitarian support and secure financial resources for refugees led to this appointment.