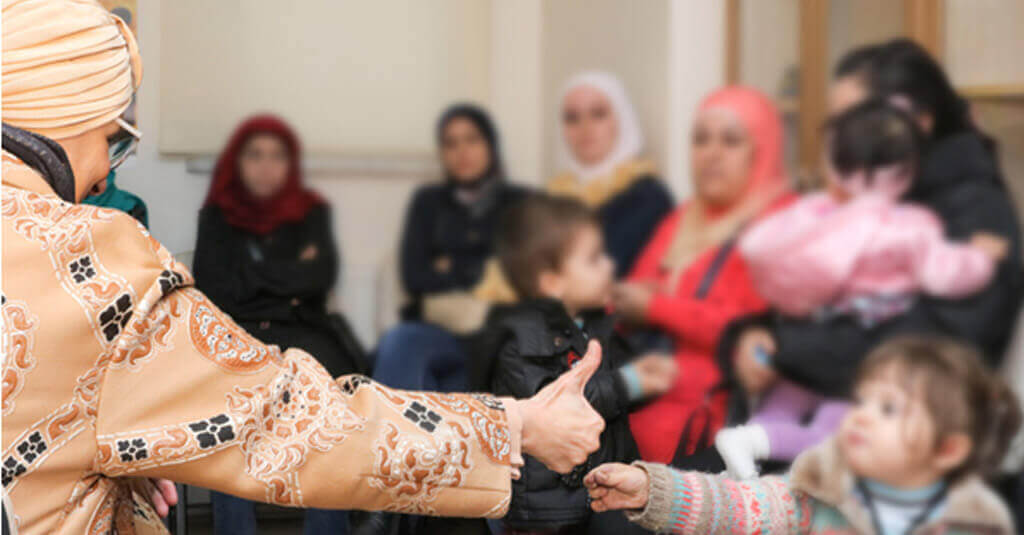 SHARJAH: H.H. Sheikha Jawaher bint Mohammed Al Qasimi, Wife of H.H. Dr. Sheikh Sultan bin Mohammed Al Qasimi, Supreme Council Member and Ruler of Sharjah, and UNHCR Eminent Advocate for Refugee Children, has called on individuals and communities in the Arab region and the entire world to provide necessary support and protection for refugee women and displaced children who face possibility of abuse, violence and exploitation in their host countries.
The call came after Sheikha Jawaher’s visit to UNHCR refugee centre in Istanbul, Turkey where she met Syrian women and heard of the distress they faced which resulted from fleeing their country to seek refuge.
Sheikha Jawaher discussed the idea of establishing special shelters for women and children under the supervision of the UNHCR and the government of the host country to be allocated exclusively for refugee women and their children who have no financial support.
She said, “The war has been raging in Syria for more than four years and as a result we are witnessing heavy casualties. This leaves many women and children without a husband or father or brother, thus making them more vulnerable to exploitation and violence which adds to the trauma they have already endured. Therefore, I call for immediate Arab and international action to create shelters exclusively for women and children to protect them and ensure they can achieve some kind of safe and secure future.”
Sheikha Jawaher pointed out that the Syrian refugee crisis was becoming an intractable problem that cannot be solved without a united government and community effort, and called on members of the Arab community and the world to stand together to shoulder some part of the burden as a humanitarian duty.
“No one, whether rich or poor in the Arab world, can stand by and do nothing for their Syrian brothers. Some countries are bearing a huge burden by hosting large numbers of refugees beyond their country’s capacity such as Turkey, Jordan, Egypt and Lebanon. Today, everyone should imagine being in the same situation as a refugee, giving up everything they have and risking all they hold dear, to find some semblance of peace and safety. Refugees risk their lives at sea or suffer tough conditions in refugee camps where their children would prefer to work instead of attend school in order to provide their families with a piece of bread and sip of water,” she said.
Sheikha Jawaher pointed out that a lack of education for refugee children was adding to the crisis and may result in ongoing problems for refugee families, adding that “Turkey hosts the largest number of Syrian refugees, more than 2 million over the past four years, and this constitutes a social and economic burden. What makes it more painful is that more than 400, 000 refugee children are not attending school and this means that their suffering will not end with the end of the crisis but will remain throughout their lifetime. This will not only impact on their education and their future qualifications but will negatively impact the family and the home country as well. Therefore, we must invest in children’s education by mobilizing moral and financial support to ensure children can freely pursue their education.”
She called for the need of collaborative work by the UNHCR, governments and civil society to develop new projects for refugees in the host countries to help offer job opportunities for men and women and finance health care and education for children in those States.
During the visit, Sheikha Jawaher Al Qasimi met ElifSelen, Head of the UNHCR Field Office in Istanbul, Karim Al Atassi, Deputy Representative of the UNHCR Office in Ankara and HussamShahim, Regional Director of Partnerships for the Middle East in the UNHCR Office. She highlighted the most current needs of the refugees and the group reviewed the latest developments related to refugees in the region, particularly Turkey.
Al Atassi praised the enormous efforts undertaken by Sheikha Jawaher. He said, “The humanity and respectful care Sheikha Jawaher demonstrates is a testament to her commitment to ease the suffering of refugees worldwide. The support from Sheikha Jawaher and the Emirate of Sharjah to the cause of refugees reflects the kindness of the UAE people and their continued commitment toward Arab and humanitarian issues.”
Al Atassi highlighted some challenges facing the refugees and organisations supporting them and said the greatest problem is the lack of resources and funding. “Currently, there are more than 2 million Syrian refugees, most in need of shelter, food and healthcare, and 1.9 million of them live outside camps in Turkish cities and states, requiring additional effort and budgets to serve them. As well as the large number of Syrian refugees, there are others from Iraq, Afghanistan, Somalia and other countries experiencing crisis,” he said.
He noted that the Turkish government has spared no effort to support and help refugees but the large and urgent requirements exceed the capacity of one country, and that the available finance is not even half of what is actually needed in most cases, and therefore they cannot provide for all the urgent needs of the refugees.