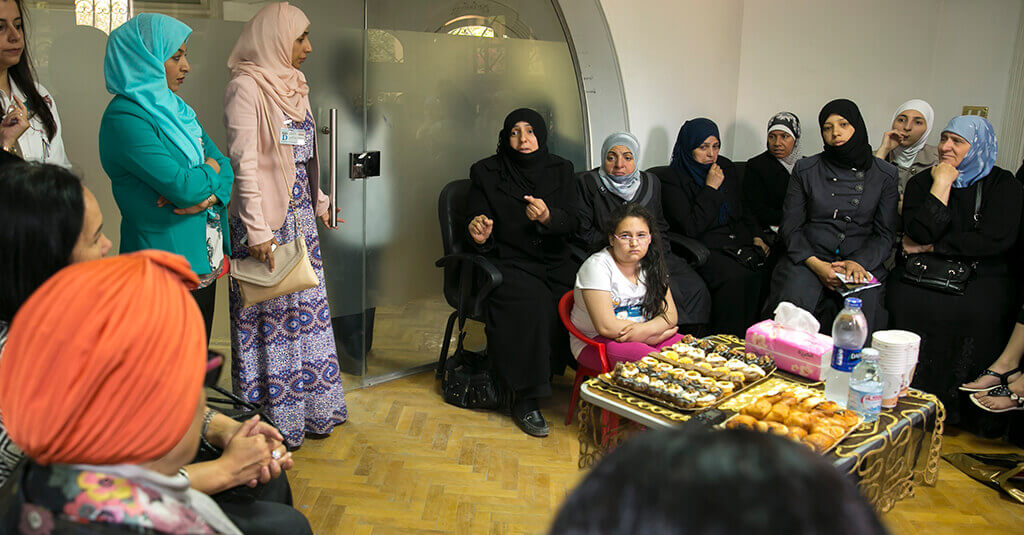 Her Highness Sheikha Jawaher Al Qasimi said, “The real crisis in a war continues long after the fighting stops with families torn apart and people left stateless, homeless, and without hope. If the international community does not come together and take action on the world’s refugee situation now the impact of war will affect generations to come. The United Nations High Commissioner for refugees reports that, for the first time since World War II, the number of refugees exceeds 51 million people, more than half are vulnerable women and children. Some have been languishing in refugee camps for decades long after the crisis that drove them from their homes has been forgotten. Furthermore, there are now nearly 19.5 million registered refugees in the Middle East and this is a vast and worrying number of people who are displaced and in great need of basic care and support giving rise to a humanitarian crisis.”
The call to action comes on World Refugee Day, established in 2001, by the UN General Assembly to renew commitment to end war and conflict, and to help the people who have been forced to flee their homes. World Refugee Day honours the strength and resilience of over 51 million people around the world who have fled war, persecution and human rights abuses. The UN Secretary General, Ban Ki Moon said, it is an opportunity for the international community to recognize the plight of millions of uprooted families across the globe.
According to the UNHCR, there are more than 51 million refugees around the world living in widely varying conditions from well-established camps and collective centres to shelters and open spaces as a direct result from wars, and natural disasters amongst many other reasons. Statistics have shown that each region and each country carries its own causes of having displaced refugees. There are more than five million Palestinian refugees and nearly million Syrians who have been displaced outside their country. Another 7.5 million are displaced internally. An additional three million are displaced in Iraq bringing the total to 19.5 million registered refugees.

“The numbers of refugees are on the rise each day, and I am saddened to hear that this month has seen a new influx of over 23,000 refugees fleeing their homes to escape the conflict in Syria and arriving in Turkey, homeless and facing hopelessness and despair. Many of them are women and children who face an uncertain future, not knowing when, or even if, they can ever return home. It is the duty and responsibility of decision makers globally to help and support these innocent victims of tragic circumstance who find themselves far from home, with little else but the clothes they can carry. As the United Nations High Commissioner for Refugees said, one family torn apart by war is too many. That is human cost of war and disasters,” said Sheikha Jawaher Al Qasimi.
Through Her Highness’ initiative, the Big Heart Foundation is sponsoring a new project to help both Turkish and Syrian women fleeing sexual and gender based violence (SGBV). It is being launched to coincide with World Refugee Day. The project will run until the end of the year, with $500,000 being made available for specialist care for Syrian and Turkish women who have fled from, or are at risk of, sexual or gender based violence.
Mariam Al Hammadi, Director Salaam Ya Seghar, which oversees all projects for The Big Heart Foundation said, “Women and children are always most at risk when placed in vulnerable situations and so it is essential that specialist services be provided for them. The primary objective of the SGBV program is to offer life-saving support and services to SGBV survivors, and to raise awareness of SGBV issues. The centres will be equipped to provide psychosocial, medical and legal services for the women of the community who have endured sexual and gender-based violence. Girls and women in need will be able to benefit from focus group discussions, individual therapy or counselling sessions and case-management and referral to other existing specialised services when required.”
Approximately 3000 Turkish and Syrian women are expected to benefit from the SGBV prevention and support programme. Women will benefit from learning, life-skills and income generating activities aimed at increasing confidence-building and economic opportunities for them. She added that these projects can help restore the lives of SGBV survivors so that the legacy of war they have lived through does not diminish their quality of life for the future. Mariam Hammadi quoted Her Highness, “Wars end, but the suffering remains unless action is taken to give critical care and support. It is the duty of all Arab countries to provide as much help and support to refugees now to prevent a crisis running into several generations. ”
In May 2013, the United Nations High Commissioner for Refugees (UNHCR) appointed Her Highness Sheikha Jawaher Al Qasimi as UNHCR Eminent Advocate for Refugee Children, one of the most distinguished positions in international humanitarianism. This was in recognition of HH’s tireless efforts to raise public awareness about refugees, a cause she has been devoted to. Her Highness Sheikha Jawaher’s commitment to alleviating the suffering of women and children affected by war, and her eagerness to launch life-saving and life-changing initiatives, mobilise humanitarian support and secure financial resources for refugees, led to this appointment.
In May 2015 Her Highness transformed the Big Heart Campaign into a Foundation which will give it a greater capacity to influence and have access to decision makers worldwide. It will also increase financial support enabling it to develop programmes and initiatives to support refugees and needy people in the region and the world, and provide a better life for them. Since its inception the Big Heart has provided life-saving medical services to over 365,000 Syrian refugees and gave more than 400,000 others vital food and financial aid. During the colder winter months in Syria and its neighbouring countries of Jordan, Iraq, Turkey and Lebanon the foundation provided basic essentials to children and their families such as warm shelters, blankets and clothing.