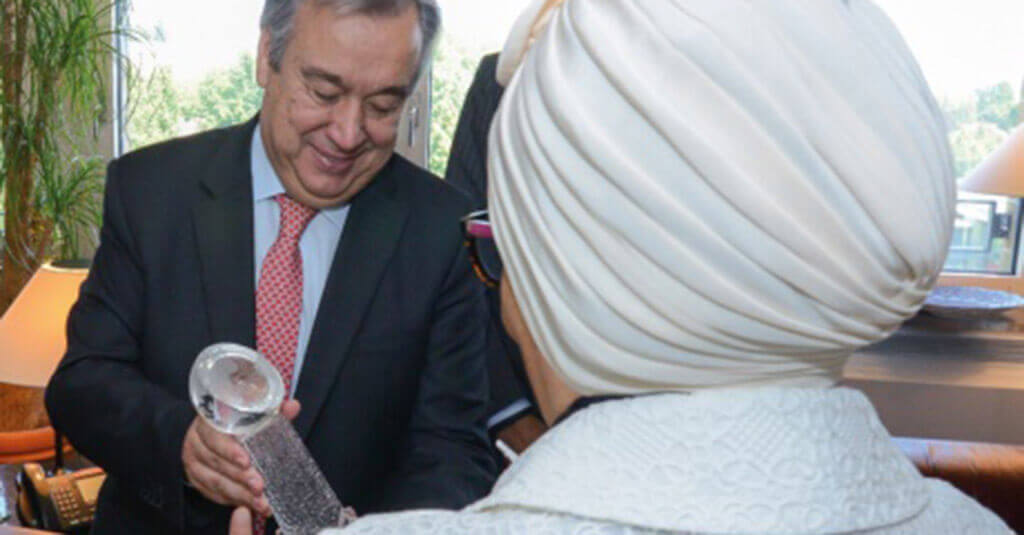 GENEVA, May 31, 2015: The United Nations High Commissioner for Refugees (UNHCR), Antonio Guterres, has praised Sheikha Jawaher Bint Mohammed Al Qasimi, UNHCR Eminent Advocate for Refugee Children and Chairperson of The Big Heart Foundation, and wife of His Highness Dr Sheikh Sultan Bin Mohammed Al Qasimi, Supreme Council Member and Ruler of Sharjah, for her help and support to refugees throughout the world.
During the meeting, Guterres presented the UNHCR Advocacy Award to Sheikha Jawaher in recognition and appreciation of her efforts to alleviate the suffering of families and children affected by wars and conflicts, and her eagerness to launch initiatives to raise awareness about refugee issues and secure the financial resources needed to provide humanitarian aid worldwide.
The High Commissioner conveyed this message when he welcomed Sheikha Jawaher at the UNHCR headquarters in Geneva, Switzerland, on the second anniversary of her appointment as UNHCR Eminent Advocate for Refugee Children.

Sheikha Jawaher was received at UNHCR headquarters by Guterres, and senior staff members from the UNHCR. FirasKayyal, Senior External Relation Officer at UNHCR, praised Sheikha Jawaher and The Big Heart Foundation for their direct involvement and monitoring of projects that were jointly launched, as well as her commitment to providing assistance to all refugees in MENA.
Guterres said, “In the true spirit of solidarity, Sheikha Jawaher’s humanitarian service and unfettered commitment to refugees is heartening and commendable. In her capacity as UNHCR Eminent Advocate, she spearheaded initiatives that have served to mobilise support and raise awareness for thousands of refugees. These have made an enormous difference and above all, are inspiring others in the region to give. I have the great honour to celebrate Sheikha Jawaher’s outstanding contribution to supporting the forcibly displaced. Her dedication and leadership will continue to be a guiding example.”
He added, “As UNHCR Eminent Advocate for Refugee Children, Sheikha Jawaher has launched many initiatives to rally support and raise awareness about the issues of thousands of refugees scattered across the world. Her efforts have made a tremendous difference, and more importantly, her ability to inspire others to give more and exert extra effort has contributed to our efforts. It is a great honour for me to recognise her momentous contributions to supporting refugees and displaced people.”

The High Commissioner pointed out that Sheikha Jawaher’s devotion and leadership will remain an example to be followed, and stressed that the Big Heart Foundation led one of the most important and successful campaigns dedicated to refugee children on a global level.
The High Commissioner asked Sheikha Jawaher to continue in her post as UNHCR Eminent Advocate for Refugee Children and to carry on leading the way in advocacy and support for refugees caught up in the Mena humanitarian crisis.
Sheikha Jawaher said, “I’d like to express my profound appreciation for the role played by UNHCR in highlighting the plight of refugees and assisting them to overcome the challenges of displacement. Instability throughout the world and in Mena has led to large numbers of refugees who are faced with a myriad of problems which they are able to tackle and overcome with the invaluable assistance provided by UNHCR and its partners. I call for a concerted effort to address the plight of refugees and to help ease the burden on the host countries.”
She added that giving refugees a dignified life requires support and assistance for the host countries and securing budgets for relief operations. The action taken against refugee smuggling networks should not affect the security and safety of refugees themselves, as they often have no choice but to flee to escape death. They risk all on dangerous vessels in search of refuge.
Sheikha Jawaher underlined the importance of education and knowledge for refugee children, stating that the issue needs to be a priority for the leaders of the region and the world. The future of children should not be left hanging in the balance or they may fall prey to conflicts and international inaction.
“Advocating for the rights of children and helping the needy stems from the values of philanthropy, kindness and compassion, which are characteristics that distinguish the UAE and Arab community as a whole. These are values that were laid down by the late Sheikh Zayed Bin Sultan Al Nahyan, who was a unique humanitarian leader that we all learned from and follow,” she said.
Sheikha Jawaher reiterated that she would always remain a supporter and advocate for the issues of refugee children and people in need across the world, and noted that the mission has not yet reached completion. What has been achieved is but a fragment compared to the magnitude of the prolonged ordeal of refugees worldwide.

She discussed with the High Commissioner for Refugees and UNHCR prominent officials the current refugee situation in light of recent developments in the Arab region, as well as wars and natural disasters across the globe. A short documentary was shown during the meeting, highlighting the achievements of Sheikha Jawaher since her appointment as an Eminent Advocate for Refugee Children.