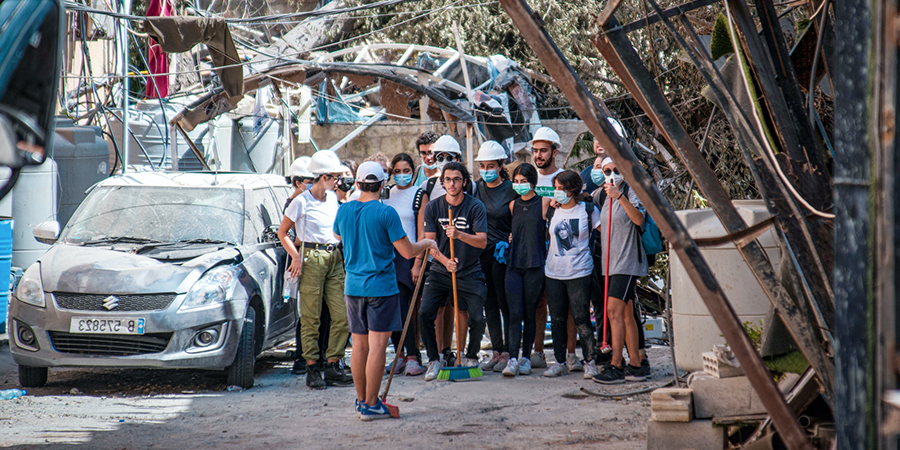 ‘Salam Beirut’, an emergency aid campaign aimed to provide emergency relief for victims of the devastating explosion that struck Port Beirut, launched by Her Highness Sheikha Jawaher bint Mohammed Al Qasimi, Wife of His Highness the Ruler of Sharjah, Chairperson of The Big Heart Foundation (TBHF) and Eminent Advocate for Refugee Children at UNHCR, has commenced work on the repairs and restoration of 485 homes destroyed in the Beirut explosion, which will enable 2,900 victims –225 of which are refugees– to return to their dwellings in the next six months.
Led by Sharjah-based global humanitarian organization, The Big Heart Foundation (TBHF), the initial projects of Salam Beirut has identified two emergency shelter intervention projects to support; the first one by UNHCR titled ‘Stand with Lebanon’, and the second one designed by Basmeh & Zeitooneh, a registered community relief organisation in Lebanon. Relief work has already commenced in several affected neighbourhoods, namely, Marfaa, Medwar, Jisr, Khodr, Mar Mikhael, Rmeil, Hikmeh, Jeitaoui, Mustashfa El-Roum and Qobayat, and finally, Bori Hammoud on Mount Lebanon.

2,250 victims including refugees to be rehabilitated via UNHCR project
Salam Beirut is enabling UNHCR to see its ‘Stand with Lebanon’ initiative through to fruition. The massive rehabilitation project has begun with providing emergency shelter kits to 2,025 Lebanese people and 225 refugees affected by the explosions. The project will also facilitate repair works in 355 damaged houses, including restoring collapsed and damaged windows, doors and roofs, reinstating common infrastructure like staircases, utilities and spaces, and finally, rebuilding damaged refugee shelters.

UNHCR is also mobilizing its local relief stocks to provide essential supplies such as blankets, mattresses and plastic sheets to the victims.

TBHF supports most vulnerable households via Basmeh & Zeitooneh’s targeted interventions
Meanwhile, Basmeh & Zeitooneh’s emergency response team is working on restoring 130 houses damaged in the explosions under the supervision of qualified engineers, including removal of rubble, providing necessary rehabilitation material, electricity maintenance, plumbing and carpentry services, as well as sanitation facilities. It is supplying ready-to-eat also meals, bottled drinking water and other essential supplies to the victims.

The project has also provided temporary housing to the victims and will rehabilitate 650 affected people, including Lebanese nationals as well as refugees, on completion.
Speaking about the ongoing campaign, Mariam Al Hammadi, Director of TBHF, said the entity’s humanitarian inputs focused on the most urgent needs of the affected residents and refugees. She asserted that the initial projects of the campaign were on ode to the lovers of the historic city of Beirut who are coming forward to fulfill their humanitarian and moral duty towards their land and its people.

Al Hammadi further explained: “Salam Beirut’s humanitarian relief strategy is based on identifying the most pressing needs of the victims of this unprecedented tragedy with our on-ground partners. In keeping with this, the repair, restoration and relief operations targeted as part of the first phase of the campaign commenced after our partners, UNHCR and Basmeh & Zeitooneh, conducted extensive field visits to determine the real and immediate needs of the victims.”

“We are hopeful that TBHF’s interventions will contribute to providing comfort to thousands of victims and alleviate some of their psychological, financial and physical suffering. We hope they will be able to return safely to their restored homes soon and pick up their lives in the near future. We appeal to the global community to support the Beirut victims in their hour of need and contribute generously to the cause,” she concluded.