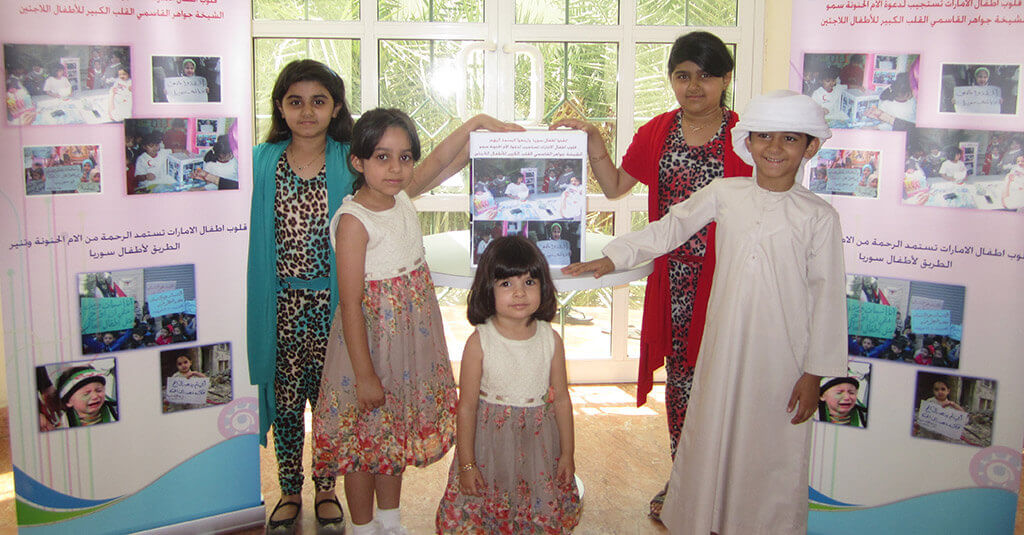 Boy donates his birthday gift in heartwarming gesture of togetherness with 850,000 Syrian refugee children
UAE, Sharjah, July 2013: In a strong show of solidarity with almost a million fellow children who are trapped in the crossfire of the Syrian conflict, the Sharjah Girl Guides have held a baking workshop to raise money for the ‘Big Heart for Syrian Refugee Children’ campaign. They were supported by FUNN, which designated its most gifted young video specialists to film and edit the Girl Guides’ acts of generosity, in order to give the noble cause online exposure worldwide.
In an inspiring gesture of generosity, a Sharjah boy, Ibrahim Al Nakhi, donated his birthday gift to lend hope to over 850,000 Syrian refugee children who have been deprived of a normal childhood. The ‘Big Heart’, Her Highness Sheikha Jawaher Bint Mohammed Al Qasimi – the UNHCR Eminent Advocate for Refugee Children – reiterated that every contribution, big or small, makes a life-changing difference to Syrian children with nothing but hope to cling to.
In yet another heart-warming example of UAE children standing hand-in-hand with their young Syrian counterparts, Amna Abdel Jawad Al Jasmi (9) and her siblings Omar (6) and Aisha (10) advocated for the campaign among their family members through posters and a donation box. Amna and Aisha donated half their prize money from the Hamdan Bin Rashid Al Maktoum Award for Distinguished Academic Performance and the Sharjah Award for Excellence in Education. Meanwhile Omar donated his entire prize for being the nation’s youngest preacher at the Twelfth Ramadan Forum.
Noura Al Noman, Director of the Executive Office of Her Highness Sheikha Jawaher Bint Mohammed Al Qasimi, commented: “The selfless sacrifice of these young humanitarians proves that it is never too early to make a difference in the world. The ‘Big Heart for Syrian Refugee Children’ expresses its heartfelt gratitude to these courageous children and their supportive parents. By planting the seeds of humanitarianism at such a tender age, we help our children to grow into peace-loving and socially responsible adults, which will in turn minimize humanitarian disasters. The youngest donors can have the biggest hearts, and we hope the public emulates their example so that our campaign progresses from baby steps to a giant leap forward for Syrian refugees.”
Meanwhile the Government Communication Administration in Sharjah’s Social Services Department held a three-day charity food-selling event and distributed 24 donation boxes, with all proceeds benefitting the campaign.
Donors can make life-saving contributions to the ‘Big Heart for Syrian Refugee Children’ campaign. Funds are collected through ‘Salam YaSeghar’, endorsed by HH Sheikha Jawaher.