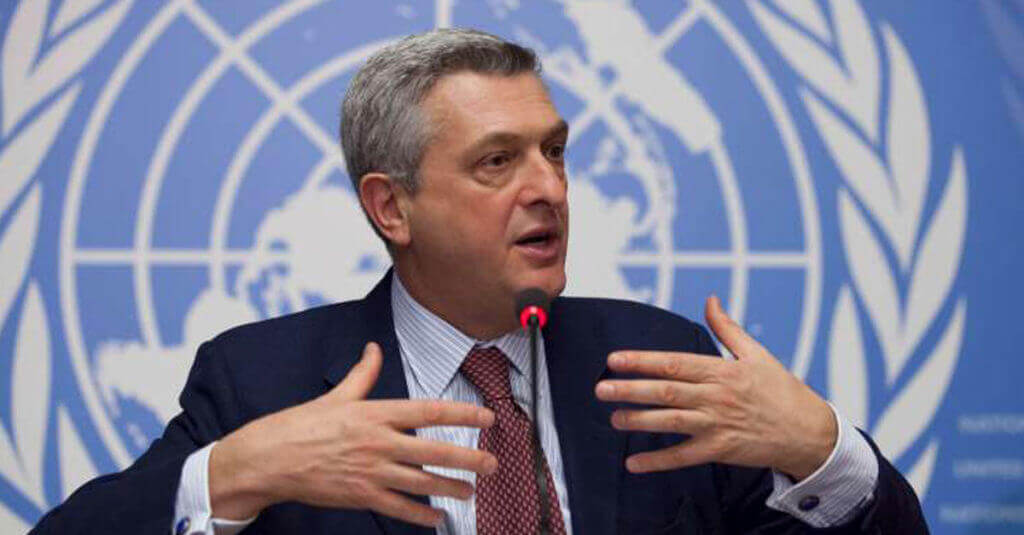 Filippo Grandi has highlighted the importance of the Sharjah International Award for Refugee Advocacy and Support in inspiring others to make a difference in the lives of refugees. The United Nations High Commissioner for Refugees said that the award, launched by Her Highness Sheikha Jawaher bint Mohammed Al Qasimi, Wife of His Highness The Ruler of Sharjah, Eminent Advocate for Refugee Children at the United Nations High Commissioner for Refugees and Chairperson of the Big Heart Foundation, encouraged the region’s peoples to show their solidarity and support for pressing humanitarian causes.

Grandi praised the immense efforts of Her Highness Sheikha Jawahar Qasimi in alleviating the suffering of refugees and displaced persons in countries across the world.

He underlined Sheikha Jawaher’s efforts in establishing and supporting programmes that provide a brighter future for refugee children, making her one of the biggest supporters of global humanitarian work.  Gradi emphasised that Sheikha Jawaher’s dedication to refugees everywhere provides an example for other leaders and individuals across the world to provide greater support for displaced persons and to continue compassionate efforts to alleviate their suffering.

1. Now that Sharjah has launched the International Award for Refugee Advocacy and Support, what message would you like this award to communicate to the refugees and the public around the world?

We are witnessing unprecedented levels of displacement globally, with over 65 million people forced to flee their homes, including some 21.3 million refugees. In the face of the upheaval and hardship that refugees and displaced people face, the Sharjah Award provides a valuable platform to showcase solidarity with refugees. The award will honour the efforts of people who dedicate their lives to alleviating the suffering of refugees, as well as encouraging and inspiring further efforts in support of the refugee cause.

2. How do awards like these contribute to the cause of empowerment and awareness on refugees across MENA?

Awards that pay tribute to the efforts of individuals and organizations who have committed their time and resources to combat the suffering of the forcibly displaced ensure that these activities are recognized and, most significantly, inspire others to follow a similar path and to stand with refugees.

3. What do you think about the timing of the award, especially with the displacement situation in the MENA region?

The establishment of the Sharjah Award comes at an important moment, as support and solidarity with refugees in this region is now needed more than ever. The Middle East hosts 39% of the world’s forcibly displaced, including Syrian refugees who has surpassed 5 million in neighboring countries, and over 250,000 Iraqi refugees in the region. This has significant consequences for the countries and communities hosting them, and an initiative such as the Sharjah Award will undoubtedly inspire others to make a difference in refugees’ lives and encourage people in the region to stand in solidarity.

4. As an Eminent Advocate for Refugee Children at the United Nations High Commissioner for Refugees (UNHCR), how do you see Her Highness Sheikha Jawaher bint Mohammed Al Qasimi, constitute a ‘distinguished’ humanitarian effort towards families and refugees around the world?

Her Highness Sheikha Jawaher bint Mohammed Al Qasimi is steering humanitarian efforts and change on a regional and global level. Her Highness’ efforts to alleviate the suffering of refugees and displaced people, as well as establishing and supporting programmes that contribute to a brighter future for refugee children, distinguish her as a powerful humanitarian supporter. Since being appointed as UNHCR’s first Eminent Advocate, Her Highness – both personally, and through the Big Heart Foundation – has provided essential support to some of the world’s most vulnerable people, including displaced Syrians, Iraqis and refugees from Myanmar. We are certain that Her Highness’ global efforts and outstanding dedication to the refugee cause will inspire more leaders and individuals to support refugees and humanitarian efforts.

5. Given the magnitude of refugee crises, how do you see the role of Her Highness Sheikha Jawaher as UNHCR Eminent Advocate and the role of Sharjah, in particular, in advocating and empowering the most vulnerable and displaced people?

Her Highness is UNHCR’s first Eminent Advocate and has been a staunch supporter of UNHCR’s work and operations, even before her appointment.  Her Highness has also been resolute in raising awareness of the plight of refugees. An important example is the “Investing in the Future: Protecting Refugee Children in the Middle East and North Africa Region” conference, held in October 2014 under the patronage of His Highness Sheikh Dr. Sultan Al Qasimi, Ruler of Sharjah, in cooperation with UNHCR, at which the ‘Sharjah Principles’ were launched.

We are extremely proud to have Her Highness working closely with UNHCR to advocate for the most vulnerable. We look forward to continuing this important relationship and will continue to rely heavily on Her Highness’ support in shedding light on the plight of refugees and the displaced globally.

6. In the light of the challenges UNHCR faces to respond to the acute needs of displaced people, what do you want to see more happening from the public, media and private sector?

At a time in which the world is witnessing protracted refugee crises and deepening turmoil, compassion and solidarity from all parts of society are deeply needed. Refugees, and the communities hosting them, need support from a range of institutions and individuals, and not just humanitarian organizations and governments. It is important that we are able to galvanise and draw on the contributions of all parts of society in ensuring that refugees are able to rebuild their lives and a vision of a future – as well as work towards the day when the conflict and instability which drove them from their homes comes to an end, and they are to contribute to building peace in their own countries.