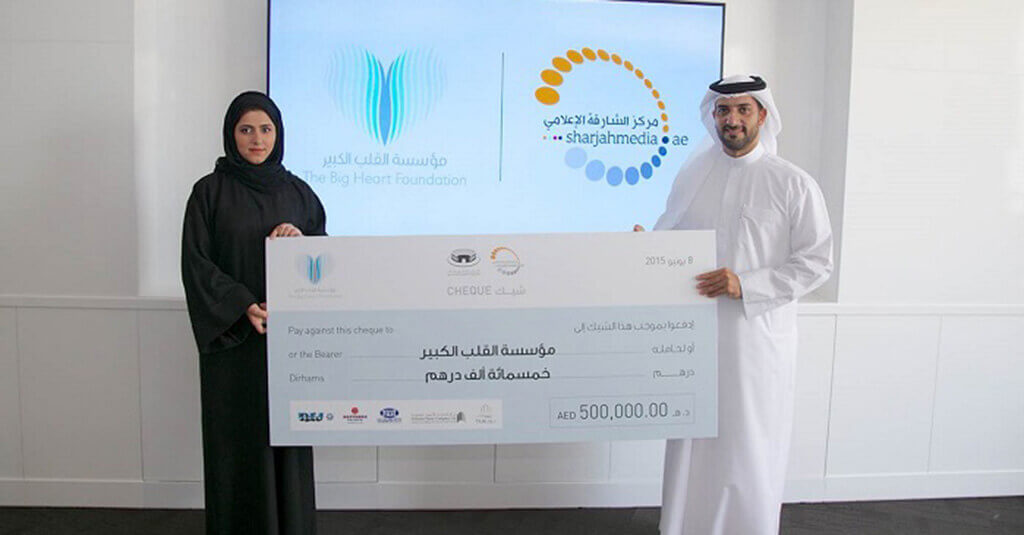 SHARJAH, June 10, 2015: The Big Heart Foundation, which provides aid for displaced children around the world, has received a cheque for Dhs500,000 from Sheikh Sultan Bin Ahmed Al Qasimi, the Chairman of Sharjah Media Centre. The amount consists of the proceeds raised by a charity concert organised by veteran Lebanese singer MajidaAlroumi at Al Majaz Amphitheatre in January, 2015.

The cheque was received in the presence of Osama Al Samra, Director of Sharjah Media Centre, and Mariam Al Hammadi, Director of Salam Ya Seghar, a campaign of the Big Heart Foundation.
Sheikh Sultan Bin Ahmed Al Qasimi praised the role played by the Big Heart Foundation in supporting refugee children and children in need, both in the region and worldwide, under the directives of Sheikha Jawaher Bint Mohammed Al Qasimi, wife of His Highness the Ruler of Sharjah, UNHCR Eminent Advocate for Refugee Children and Chairperson of The Big Heart Foundation.
Sheikh Al Qasimi said: “The success of Alroumi’s concert will encourage more charity events, where proceeds can be donated to societies specialising in social, health, and educational affairs. This is in line with the vision of His Highness Dr Sheikh Sultan bin Mohammed Al Qasimi, Supreme Council Member and Ruler of Sharjah, in enhancing the position Sharjah occupies as a humanitarian beacon and a leader in supporting friendly nations.”
Sheikh Al Qasimi thanked all sponsors of the charity concert and the audience for their eagerness to be part of the charitable event. He noted that the full proceeds of the concert will go to the Big Heart Foundation since it is a humanitarian organisation supporting the most vulnerable social segments today. “The amount will support the organisation’s plans to protect children and provide them with necessary relief in the form of shelter, food, health care, psychological rehabilitation and education,” he said.
Mariam Al Hammadi said that the full proceeds of the concert will go to supporting Syrian children in refugee camps in neighbouring countries. “The Big Heart Foundation works to alleviate the suffering of refugees and needy children, put a smile on their faces and help them overcome the challenges they face in order to resume normal lives. This tremendous community support gives us a greater capacity to expand the number of beneficiaries from our service in countries where Syrian children need us most,” she added.