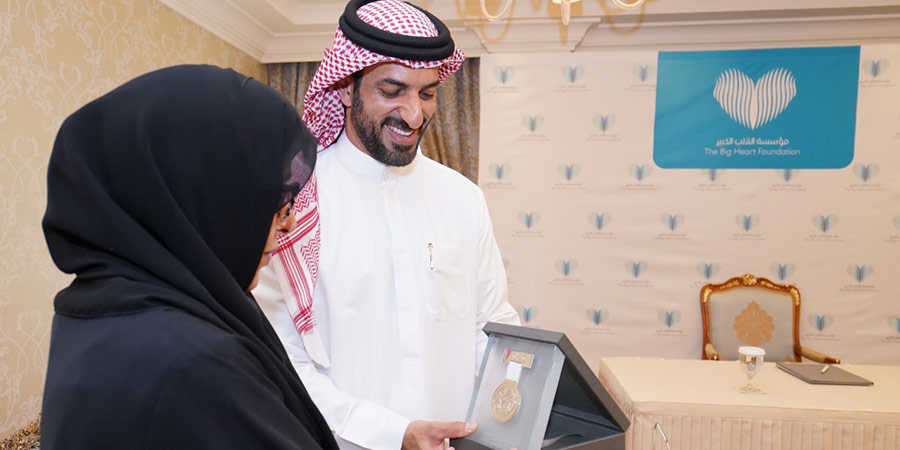 Her Highness Sheikha Jawaher bint Mohammed Al Qasimi, wife of His Highness the Ruler of Sharjah, Chairperson of The Big Heart Foundation (TBHF) and Eminent Advocate for Refugee Children at (UNHCR), underscored that actors in the humanitarian sector need to be more than charitable and sympathetic; they must also be extremely passionate about human rights to be able to do extraordinary work that can save lives and protect people in the time of their greatest need.

HH Sheikha Jawaher Al Qasimi made these remarks as she entrusted Sheikh Sultan bin Ahmed Al Qasimi, Chairman of the Sharjah Media Council (SMC) with the responsibility of being the TBHF Humanitarian Envoy for the second time in a row, in recognition of his outstanding efforts to support refugees and other vulnerable communities since his appointment in 2017.

The renewed confidence is an acknowledgement of Sheikh Sultan bin Ahmed Al Qasimi’s instrumental role in using media judiciously to highlight the humanitarian issues to achieve greater levels of awareness by projecting the real situation in crisis-ridden areas and helping mobilise large scale community support to TBHF’s programmes for refugees and people in distress. It is also an appreciation of his work in mobilising corporate donors through his field visits to several refugee camps organised by TBHF.

Sheikha Jawaher Al Qasimi pointed out that as TBHF’s Humanitarian Envoy, one fulfils several key responsibilities, including following up on relief programmes, meeting with refugees and displaced persons and perceiving their needs. She remarked that the role requires a humanist whose personal values are aligned perfectly with the higher ideals of TBHF.

Sheikh Sultan bin Ahmed Al Qasimi proved himself equal to that task through his significant contributions to TBHF’s projects and programmes, emphasised the wife of HH Ruler of Sharjah.

“Sheikh Sultan bin Ahmed Al Qasimi played a vital role in implementing TBHF’s projects that provided an array of services covering healthcare, education, food and social security to hundreds of thousands of refugees. His noble efforts have led to him being named the TBHF’s Humanitarian Envoy for the second time. We look forward to seeing a new chapter of achievements that respond to crisis and conflict challenges around the world,” said Sheikha Jawaher Al Qasimi.

For his part, Sheikh Sultan bin Ahmed Al Qasimi expressed his delight and appreciation at the renewed confidence and trust that had been placed in him as Humanitarian Envoy by HH Sheikha Jawaher Al Qasimi. He stressed that it was important to further efforts aimed at turning the issues of refugees into a global humanitarian responsibility that would engage the international community to find tangible solutions. He underscored his keenness to communicate TBHF’s message to the world at large and realise its objectives.

Sheikh Sultan bin Ahmed also called on all entities and individuals to do their part in fulfilling their responsibility towards the global human community by contributing towards solving the challenges that refugees face. He remarked that the consequences of the refugee crisis are not confined to a specific geographical region, which makes facing its challenges the responsibility of every human being around the world. 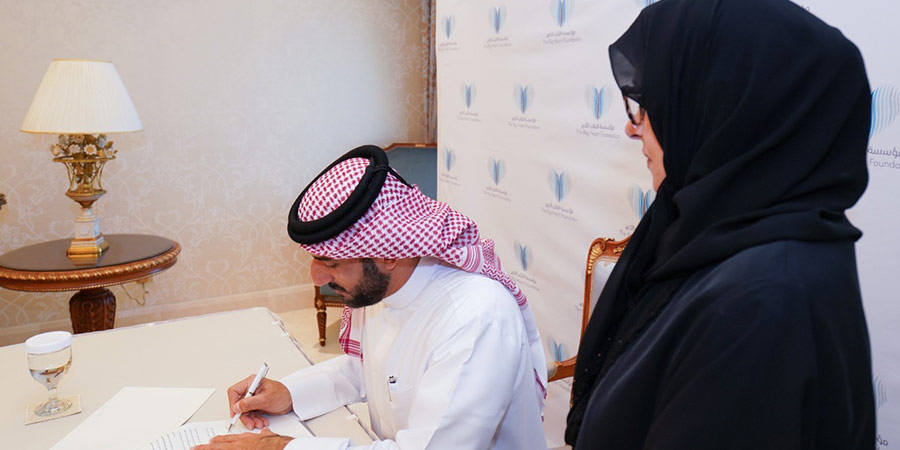 Two years of giving
Since his appointment as TBHF’s Humanitarian Envoy, Sheikh Sultan bin Ahmad Al Qasimi has taken part in many activities, events and programmes that led to sustainable humanitarian action. In 2017, he participated in the first media visit to The Big Heart Clinic at the Zaatari camp in Jordan. He also joined the meeting with the United Nations Office for the Coordination of Humanitarian Affairs (OCHA) to discuss cooperation in the future.

In 2018, he witnessed the agreement signed between TBHF and the Malala Fund, launched by Nobel laureate and female education activist, Malala Yousafzai, in Oxford, to finance a school project for girls in Pakistan through TBHF’s ‘Girl Child Fund’. He also witnessed the signing of an MoU agreement between TBHF, Sharjah Police and Emirates Auction, whereby Sharjah Police allocated the proceeds of three distinguished car plate numbers to TBHF in support of its humanitarian projects around the world.

Sheikh Sultan bin Ahmed Al Qasimi has also taken part in the ‘Investing in the Future Conference’ 2018 (IIFMENA) and announced the ‘Sharjah Declaration for Youth Empowerment’. He took part in the field visit to Kutupalong camp in Bangladesh organized by TBHF to inaugurate the permanent hospital that was funded by the Sharjah Broadcasting Authority (SBA) to provide lifesaving treatment and healthcare services to Rohingya refugees in the camp.

In 2019, he led TBHF delegation’s field visit to the Kakuma refugee camp in Kenya and played a pivotal role in harnessing the media to raise awareness on refugees and vulnerable people.

TBHF was launched under the directives of HH Sheikha Jawaher Al Qasimi to unite humanitarian efforts and help refugee children and their families. It has offered support to refugees in more than ten countries, including Lebanon, Palestine, Jordan, Iraq, Syria and Malaysia. TBHF, a UAE-based charity, was established in 2013 as a campaign, and in 2015, it became a global foundation that has been overseeing humanitarian support globally.