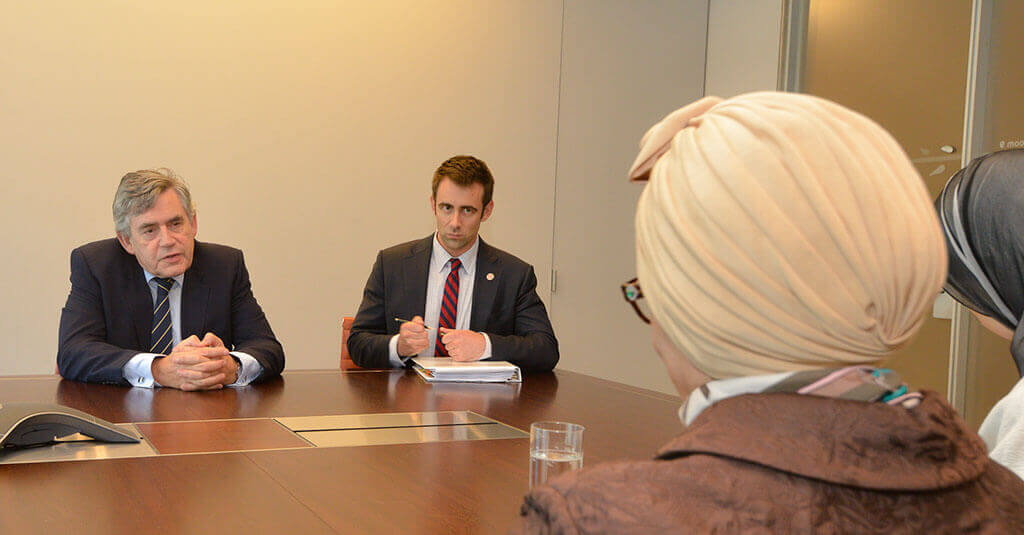 September 25, 2014: WIFE of Sheikh Dr. Sultan Bin Muhammad Al Qasimi, Member of the UAE Supreme Council and Ruler of Sharjah, Sheikha Jawaher Al Qasimi, UNHCR Eminent Advocate for Refugee Children, has emphasized the importance of action by the international community to put an end to the suffering of refugee women and children around the world. She stressed, “Refugee rights should be a top priority for the international community, resulting in availing decent life conditions for them, and more importantly, hope for the future.
She made these statements during recent meetings with leaders of international organizations working in the field of refugee support, as well as international humanitarian aid leaders, on the sidelines of the 69th regular session of the United Nations’ General Assembly. Sheikha Jawaher Al Qasimi met with three of the top UN officials, discussing ways to reach a common mechanism of action among all organizations and relevant entities active in the field, aiming at enhancing collaboration in refugee support activities, and avoiding replication of action, in order to achieve the maximum utilization of financial and human resources, expand services, and increase the sustainability of these services.
She stated that refugee aid should go beyond providing tents and humanitarian aid, and become a top priority item on world leaders’ agenda. She emphasized that it is only via the collaboration of all influencers in various domains that refugee suffering can be stopped from becoming a prolonged crisis. She expressed her deep compassion and sympathy with those who have been forcefully displaced away from their homes, becoming only numbers in camps around the world.

Sheikha Jawaher highlighted that maintaining human dignity is a basic right called for by all religious creeds, and guaranteed by laws and regulations. She stressed that the world should take solid steps to mitigate the suffering of refugees, and children refugees in particular, whose future is endangered. She called upon international humanitarian aid leaders to take action in order to stop this suffering, and prevent it from becoming a prolonged displacement.

She also stressed the importance of advocating peace and putting an end to the conflicts that lead to displacement, highlighting that technological advancements should be accompanied by human development, especially as more than half of the world population live in poor countries and areas affected by conflict.
Sheikha Jawaher started her high-level meetings with Gordon Brown, former UK Prime Minister and United Nations Special Envoy on Global Education. The meeting discussed ways to meet humanitarian challenges pertaining to refugees, particular in terms of their protection, and meeting their most basic needs. She also highlighted the suffering of Syrian IDPs and refugees in surrounding countries, stressing her personal commitment to their plight. She highlighted the outcome of the Big Heart Campaign, especially in its third phase, which focused on providing educational aid to more than 1.2 million Syrian children in refuge. She offered an official invitation to Brown to attend the upcoming ‘Investing in the Future’ conference, which will spread awareness among young people around the current situation in the region and the negative implications of the refugees issue on the future, encouraging the youth to take part in humanitarian aid activities.

Brown said, “The commitment of Sheikha Jawaher to improve the condition of refugee children, particularly the right to education through the Big Heart Campaign, has had a tremendous impact. Today we are committed to work together to do more for children displaced by conflict and to engage young people in the campaign to reach universal education.”

Sheikha Jawaher also met with Valerie Amos, UN Under-Secretary-General for Humanitarian Affairs and Emergency Relief Coordinator, who briefed her on the latest updates on refugees in the Middle East, and efforts exerted by the UN to provide humanitarian relief, as well as the mechanisms by which the UN mitigates challenges facing the delivery of this relief to a wider category of refugees and IDPs.
Sheikha Jawaher emphasized the importance of collaboration between international organizations, highlighting that the Big Heart Campaign succeeded so far in raising $15 million, which helped in easing the suffering of Syrian IDPs, as well as refugees in Jordan, Iraq, Lebanon, and Egypt. She also met with ZainabBangura, Special Representative of the United Nations Secretary General on Sexual Violence in Conflict, who briefed her on the latest UN reports on the sexual violence being faced by refugees, especially children. Sheikha Jawaher called for the launch of awareness campaigns among refugees to encourage them to report sexual assaults, and guaranteeing no impunity for the assaulter.
She stressed that sexual violence should count as a war crime, owing to its use in humiliating civilians and forcing them to be displaced, highlighting that this topic will be high on the agenda of the ‘Investing in the Future’ conference.
Bangura stated, “I very much look forward to working together with her to prevent and respond to sexual violence against refugee children and other vulnerable groups. The commitment and engagement of champions like Her Highness is invaluable if we are to bring an end to this heinous crime.” — SG