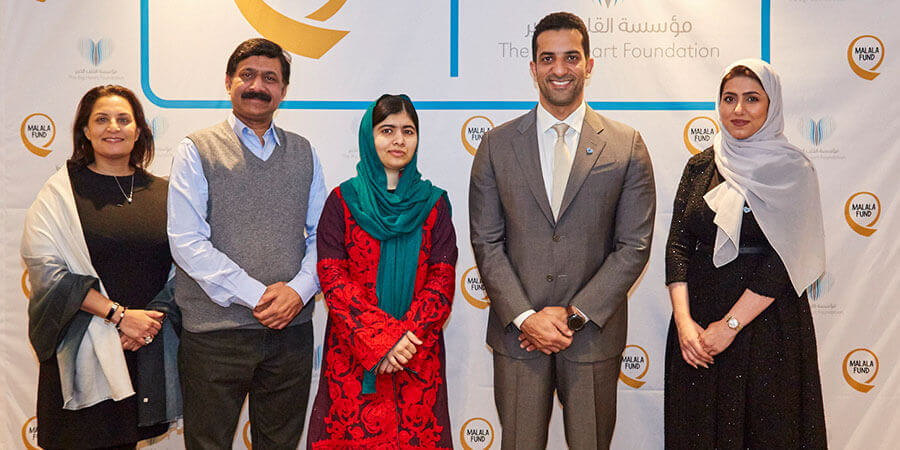 In keeping with its dedication to ensuring that girls have access to education, and enabling them to contribute to the development of their local communities, The Big Heart Foundation (TBHF), a Sharjah-based global humanitarian charity dedicated to helping refugees and people in need worldwide, is funding the second phase of the establishment of a school for girls in Pakistan.

The school project will be funded by the TBHF ‘Girl Child Fund’, in cooperation with the ‘Malala Fund’, launched by Nobel Laureate and female education activist, Malala Yousafzai.

The school is being constructed in Swat Valley, Yousafzai’s home district in Pakistan. The TBHF donation of USD 700,000 will fund the school’s second phase of development, which is set for completion in April 2018. It will open its doors to 350 girls in its 11 classrooms. Gradually, the educational services and school infrastructure will expand to accommodate 1,000 students in all grades.

Highlighting the symbolic role education has in contributing to building a better world, Sheikh Sultan bin Ahmed Al Qasimi said: “Under the vision of His Highness Sheikh Dr Sultan bin Muhammad Al Qasimi, Member of the Supreme Council Ruler of Sharjah, and the directives of Her Highness Sheikha Jawaher bint Mohammed Al Qasimi, wife of His Highness the Ruler of Sharjah, the emirate of Sharjah believes in the importance of education, especially to young girls, in building a nation that is founded on virtues of tolerance, justice and peace socially and politically.

Sheikh Sultan bin Ahmed Al Qasimi continued: “It is important to recognize that supporting our young and future generations with education is a fundamental responsibility for the world, and cooperating with one another to achieve this initiative is key to make sure that every young boy and girl has access to knowledge, and has access to opportunities for building a hopeful future. This future doesn’t only ensure the sustainability and continuity of wisdom, but will reflect its values on humanity as a whole, and on the positive impacts amongst communities and nations across the world.”

TBHF’s Humanitarian Envoy noted that many young girls worldwide face difficulties to have access to school, acquiring or even continuing their education, due to political unrest or various social and financial conditions that deprive them the right to education. He called for concerted efforts by international institutions to support girls and ensure their access to safe education, which would secure them a brighter future and help achieve developmental goals.

Commenting on the agreement, Malala Yousafzai, said: “I overwhelmingly thank The Big Heart Foundation for believing in my dream of a world where girls can choose their own future path. With their support, the Malala Fund can provide education for girls in my hometown Swat Valley in Pakistan.”

TBHF’s donation, covering half the project’s financial needs, will be used to build classrooms, science and computer labs, staff rooms, principal’s room, a reception area and playground facilities. The school will also include a library, laboratory, an activity hall, and a dormitory for female teachers from remote areas.

“The funding of the second phase of the school by the TBHF’s Girl Child Fund mirrors the vision of Her Highness Sheikha Jawaher bint Muhammad Al Qasimi, wife of His Highness the Ruler of Sharjah and Chairperson of TBHF. Sheikha Jawaher’s philosophy is to create a world where girls can have better access to education and get fair and equal opportunities that enable them to enjoy better living conditions, and develop themselves and their communities,” said Mariam Al Hammadi.

She underlined that educated girls can achieve greater success in their future careers because education can be life-changing for them, helping them develop to their full potential and putting them on a lifetime path for success. Educated girls are empowered to deal with life challenges in a positive way and can make successful families. “We hope the new school will contribute to creating generations of confident and inspiring young women who are able to challenge difficulties and seize every great opportunity that comes their way,” she added.

Following the signing of the agreement, Sheikh Sultan bin Ahmad Al Qasimi, Malala Yousafzai and Mariam Al Hammadi discussed in a meeting several vital topics including the challenges that are being faced by children all over the world, especially young girls, with education and the difficulties they face to reach to their schools. Both parties discussed ways to address these challenges and cooperate to empower young girls for their right of education.

In June 2015, Her Highness Sheikha Jawaher bint Mohammed Al Qasimi officially launched The Big Heart Foundation to coincide with the World Refugee Day. The foundation aims to protect and enable vulnerable and marginalized children and their families, focusing primarily on the Arab world, but extending support to areas in most need.