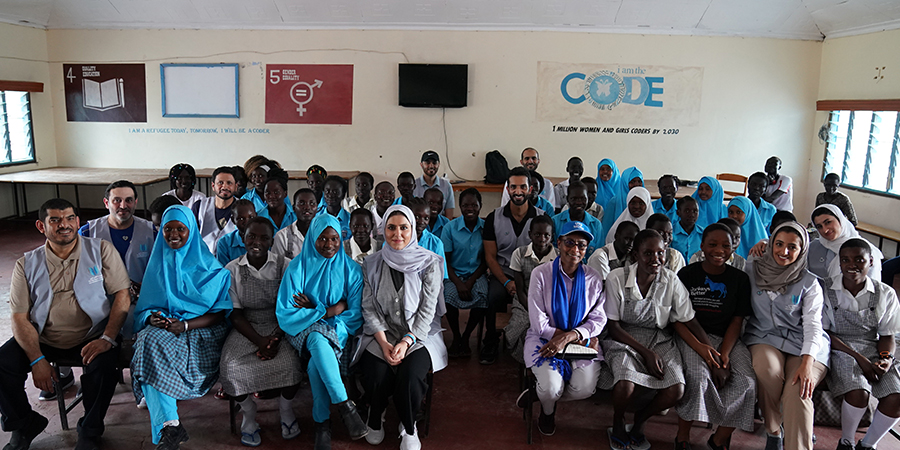 Home to 485,524 refugees and asylum seekers housed mainly between the camps in Dadaab and Kakuma according to latest UNHCR statistics – Kenya is one of the most generous refugee-hosting nations in the world, with a humanitarian infrastructure that requires more attention and support of the international community to be able to fulfil the basic needs of its stateless residents. The Sharjah-based global humanitarian organization, The Big Heart Foundation (TBHF), has therefore, embarked on a new initiative to turn the spotlight on the nation’s urgent and growing humanitarian needs.

On a recently concluded field visit to Kakuma refugee camp in Kenya’s north western Turkana County, the site of a UNHCR refugee camp established in 1992, led by Sheikh Sultan bin Ahmed Al Qasimi, Chairperson of Sharjah Media Council (SMC) and TBHF Humanitarian Envoy, a delegation of top Emirati officials, CEOs and business leaders have taken a closer look at the precarious existence and daily challenges of the camp’s 192,301 residents representing 22 nationalities who have fled war and instability in search of food, security, shelter, health care, education, livelihoods and more.

Sheikh Sultan bin Ahmed Al Qasimi said: “Almost 40 percent of Kenya’s refugees and asylum seekers reside in Kakuma, and their humanitarian needs continue to rise due to the continued influx from the two main refugee producing countries of Somalia and South Sudan. Sharjah’s leadership as well as its public and private institutions are deeply committed to supporting refugees and vulnerable populations around the world, and keen to respond strategically to their most pressing humanitarian needs. Doing good is the essence of Emirati history and culture. It is the basis of the relationship between all of UAE’s institutions and individuals”.

This field visit is the third of its kind by TBHF, which the organization has been making to nations that require urgent humanitarian support. Led by TBHF, these special delegations feature a dynamic mix of officials from both Sharjah’s public and private sectors, who have been to Bangladesh twice before and now to Kenya. It is representative of the vision of His Highness Sheikh Dr. Sultan bin Muhammad Al Qasimi, Supreme Council Member and Ruler of Sharjah, and the directives of Her Highness Sheikha Jawaher bint Mohammed Al Qasimi, Chairperson of The Big Heart Foundation (TBHF) and Eminent Advocate for Refugee Children at UNHCR, to rally more support from all quarters of the UAE community towards providing refugees and displaced people wherever they may be, with humanitarian assistance and sustainable projects that will offer them the support they need to live safe, fulfilling and dignified lives.

“Today, the world needs to draw strength from and act on our inherent humanitarian values to protect our brothers and sisters around the world who are innocent victims of war and crises. At a time when the world faces its worst humanitarian crises, it is more important than ever to mobilize stronger advocacy and efforts to alleviate people’s sufferings and work together to create conditions conducive to the enjoyment of their basic human rights. There is nothing more powerful than communities coming together to declare their willingness to provide generous and strong support to those who have been victims of their circumstances,” Sheikh Sultan bin Ahmed Al Qasimi further added.

According to UNHCR, Kenya will continue to be among the top refugee hosting countries in Africa, with 25 percent being women and children and 63 percent aged below 18 coming in from South Sudan. This makes adequate education facilities one of the nation’s major challenges. Shortage of school classrooms for females is more than 75 percent. In 2019, nearly 400 girls applied for the only high school in Kakuma Camp, and only 90 were accepted.

The TBHF delegation toured the Angelina Jolie Primary School, one of the 26 primary schools at the camp site, established by UNHCR’s Special Envoy, Angelina Jolie in 2002 to provide a safe learning environment to refugee girls. The school educates 250 female students from Grades 5 – 8.

In terms of healthcare, the drought crisis has led to an ongoing outbreak of diseases, with 2,466 registered cholera cases resulting in six deaths, and three deaths among 477 measles cases reported in 2019, according to the Kenyan Ministry of Health (MoH).

Commenting on the visit, Mariam Al Hamadi Director of TBHF, said: “This visit is a reflection of Sharjah’s and the UAE’s undulating commitment to learn more about the on ground realities of humanitarian conditions in some of the world’s biggest refugee settlements, to be able to come up with targeted plans and strategies for projects, which will tackle their daily challenges more effectively and comprehensively. It also furthers our endeavour to promote a stronger humanitarian culture in our institutions and individuals”.

“Previous visits of similar nature led to the construction of a 24/7 hospital in Bangladesh to support 140,000 Rohingya refugees in cooperation with Doctors without Borders. We are confident that in coming years there will be more Emirati humanitarian projects around the world to support more refugees and vulnerable populations in affected areas,” she added.

In June 2015, Her Highness Sheikha Jawaher bint Mohammed Al Qasimi launched The Big Heart Foundation to coincide with World Refugee Day. It followed her decision to transform what was then The Big Heart Campaign into a global humanitarian foundation. The move aimed to redouble efforts to help refugees and people in need worldwide, with the new foundation adding significantly to the UAE’s rich portfolio and long record of humanitarian initiatives, regionally and globally.