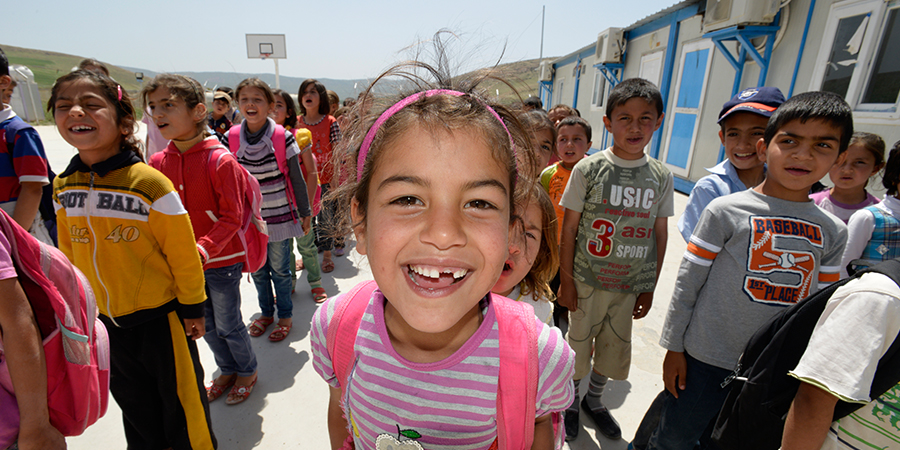 The Big Heart Foundation (TBHF) has renewed its commitment to helping refugees – which includes internally displaced persons (IDPs) as well as returnees – in Syria as well as those at the Zaatari Camp in Jordan with a financial grant of AED 2.6 million for two projects being implemented by the United Nations High Commissioner for Refugees (UNHCR). The funds are entirely from their Ramadan Zakat campaign, and were contributed by the UAE’s citizens and residents.

The UAE-based global humanitarian organisation has pledged AED 1.8 million financial grant to refurbish or reconstruct eight schools across several governorates in Syria, and AED 920,000 to set up a community centre that will serve 500 Syrian refugees in the Zaatari Camp in Jordan.
IDPs, returnees and refugee children are now more in need of humanitarian assistance than ever before. Children especially are the most affected by the destruction and damage to schools. This has given rise to an acute need for more schools across the country to accommodate displaced as well as host community children residing in these areas.
According to UNICEF, an estimated 2.1 million children inside Syria or almost one-third of the children aged 5 to 17 years are out of school and a further 1.3 million are at risk of dropping out. There are now six million in need of education assistance in Syria. Women and girls remain one of the most vulnerable groups, with girls being subjected to early marriage and dropping out of school.
The projects will be implemented in eight locations across Syria’s governorates where the education infrastructure has been severely damaged or rendered inoperable, to receive this funding. The rehabilitation work will focus on making the schools operational by adding or repairing wash facilities, electrical wiring, doors, windows, room partitions, perimeter security measures, blackboards and desks.
The eight schools are expected to be operational by December 2019 and will benefit 6,000 students.

Zaatari camp
As of mid-December 2018, 662,010 Syrians are registered with UNHCR in Jordan. Seventeen per cent of the Syrian refugee population in the country live in two camps – 78,527 in Zaatari and 40,615 in Azraq.
Ongoing displacement has led to the loss of social and community structures among the refugees who are in dire need of positive social interactions. Community centres serve as a forum for refugees to gather together and engage in a variety of activities, including education, awareness raising, social gatherings and sporting events. Such a space is critical to the development of social cohesion, interactions and community mobilisation.
The TBHF contribution of AED 920,000 will be utilised to improve the mental health status and overall wellbeing of 500 refugees living in the Zaatari Camp by supporting the running of a community centre, designed to serve as a place for refugees to gather and undertake recreational, social, and awareness raising activities. Remaining active and feeling part of a community is central to the mental and emotional welfare of all refugees and, as such, ensuring access to community centres is of critical importance. Community centres are of particular importance to women and girls, who are often more socially isolated than their male counterparts.
Mariam Al Hammadi, Director of TBHF said: “The war in Syria has dramatically impacted the population leading to increased levels of poverty, recurrent displacement and loss of assets, including the education infrastructure in most of the governorates. Through our financial support to UNHCR’s projects, which we consider a humanitarian duty, TBHF aims to not only help reconstruction efforts, but to also support the rehabilitation of the refugees in the Zaatari Camp in Jordan through social intervention projects at the community centre.”
She added: “This humane effort is in line with the directives of Her Highness Sheikha Jawaher bint Mohammed Al Qasimi, Wife of His Highness, Ruler of Sharjah and Chairperson of TBHF, who advocates sustainable and effective projects that prioritise the needs of refugees and IDPs and meet their aspirations. These projects aim to make a real positive change in their lives by connecting stakeholders and donors to consolidate their aid efforts.”
In June 2015, Her Highness Sheikha Jawaher Bint Mohammed Al Qasimi launched The Big Heart Foundation to coincide with World Refugee Day. It followed her decision to transform what was then The Big Heart Campaign into a global humanitarian foundation. The move aimed to redouble efforts to help refugees and people in need worldwide, with the new foundation adding significantly to the UAE’s rich portfolio and long record of humanitarian initiatives, regionally and globally.