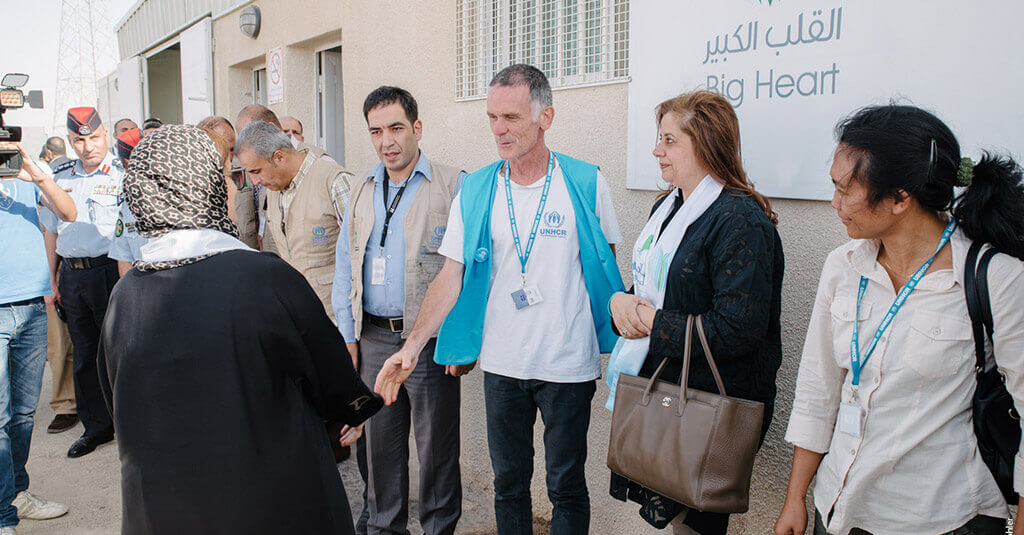 Pledge to help 46,080 Syrian refugees living in Zaatari Camp, 2062 vulnerable Syrian refugees in urban areas and more than 4000 Rohingya Muslims displaced since May 2015

Sharjah, July 26, 2015: The Big Heart Foundation (TBHF) has pledged to donate AED 7 million towards three projects run by the UNHCR which will go towards helping refugees in crisis. AED Five million will go towards healthcare services for Syrian refugees in Zaatari Camp in Jordan, one million will be dispensed to Syrian refugees in vulnerable situations as assessed by the UNHCR and another million AED will go to support the work of the UNHCR in Indonesia where thousands of Rohingya Muslims are fleeing persecution and risking their lives on unseaworthy vessels or at the hands of human traffickers.

Mariam al Hammadi, Director of Salam Ya Seghar, a TBHF initiative to improve the welfare of refugee children, said, “Ensuring sufficient healthcare is available for refugees living in Zaatari Camp is of critical importance to their health, emotional and mental state and to the general welfare of camp residents. Under the guidance and inspirational leadership of Her Highness Sheikha Jawaher Bint Mohammed Al Qasimi, wife of His Highness the Ruler of Sharjah, the Big Heart Foundation seeks to alleviate the suffering of those affected by wars and disaster and to enable them to look forward with hope. It is to that goal that we make this donation in order that essential medical care can be given to those in need. The clinic now provides comprehensive primary, mental, and reproductive healthcare services to camp residents on a 24-hour basis.”

In 2014, 175,968 consultations were carried out to residents of Zaatari and over 15,000 patients were referred for secondary or tertiary care. Jordan Health Aid Society (JHAS) implements the healthcare, backed by donations from TBHF and provides health services all day, every day of the week. The clinic is equipped with general practitioners, nurses, referral officers, and has a central laboratory, an emergency department, postpartum services department, mental health department, special medical needs facilities, a pharmacy and a medical store. JHAS treats both acute and chronic conditions and provides reproductive health services, including ante-natal and post-natal care.

A further AED 1 million has been pledged by TBHF to help over 2000 vulnerable Syrian refugee families living in urban areas in Jordan. Cash assistance will be given to them to help with urgent needs such as paying their rent, buying food, fuel or clothes. The UNHCR currently supports 21,000 families with cash allowances and aims to increase this number to 25,000 families by the end of 2015. Beneficiaries are wide spread throughout the country, with one third living in the Amman Governorate (33%), over one quarter in Irbid (28%), 15% in Mafraq, and 10% in Zarqa.

Mariam al Hammadi said, “These are essential funds, enabling refugees to live a humanitarian and dignified life. Cash will go towards enabling vulnerable Syrian refugee families to cover essential costs of living such as rent, utilities, large household appliances, medical care for children, clothing, school fees and food. It also enables them to purchase essential items such as stoves and fuel to overcome the harsh winter in Jordan.”

“Her Highness Sheikha Jawaher Al Qasimi strongly believes in the necessity of preserving the dignity of the refugee families, even though they are in need of help, and said it should be provided to them in a way that preserves their dignity and their humanity. Therefore Her Highness launched the Big Heart Foundation out of great concern for the Syrian refugee crisis, with the aim of providing urgent relief and sustainable support to refugee children and their families,” Al Hammadi said.

Those in need of financial help are identified through a predetermined criteria agreed by the inter-agency Cash Working Group, and those identified as vulnerable are assessed through home visits. Once approved as eligible for cash assistance, families receive cash on a monthly basis in a secure manner and the UNHCR continues to follow up with the families through home-visits.

Furthermore, following an appeal by the UNHCR, the TBHF has pledged AED 1 million to help Rohingya Muslim refugees in Indonesia. Earlier this year the UNHCR said that the plight of Rohingya people could lead to a humanitarian crisis and appealed for help with a campaign to improve the situation.

Al Hammadi explained the TBHF’s role, “Rohingya people are considered ‘stateless’ and are unrecognized by their government, and often face hostility in their home countries. For this reason many have fled by boat, and fallen prey to unscrupulous human traffickers risking all for a better life overseas. It is a horrendous tragedy that so many Rohingya have already lost their lives at the hands of traffickers and so the TBHF has pledged its support to the UNHCR who will undertake a number of vital interventions under its international mandate for the protection of refugees and stateless people.”

On 1 May 2015 over thirty shallow graves were discovered in Thailand, at a waiting area for migrants and later that month the Myanmar navy rescued 208 migrants at sea. It is believed that a further 139 suspected graves have been found by Malaysian police on the Thai border where Rohingya Muslims fleeing Burma were believed to have been held by human traffickers.

The UNHCR appeal is structured in three parts: Meeting the international protection needs of people who have been rescued at sea and disembarked in this situation; enhancing the information available both to people who are considering travel by sea and to those responding to them and lastly, finding solutions for addressing the root causes of these movements in source countries.

In May 2013, the United Nations High Commissioner for Refugees (UNHCR) appointed Her Highness Sheikha Jawaher as UNHCR Eminent Advocate for Refugee Children, one of the most distinguished positions in international humanitarianism. Her Highness’ commitment to alleviating the suffering of women and children affected by war, persecution and disaster and her eagerness to launch life-saving and life-changing initiatives, mobilise humanitarian support and secure financial resources for refugees, led to this appointment.

On the second anniversary of this appointment the United Nations High Commissioner for Refugees (UNHCR) Antonio Guterres praised the efforts of Her Highness Sheikha Jawaher and said Her Highness’s enormous effort highlighted the significant role played by the UAE and the Emirate of Sharjah in strengthening international response to the humanitarian crisis worldwide. The UN High Commissioner said the generous donations of the Big Heart Foundation have enabled the UNHCR to significantly expand its scope and has speeded up the delivery of aid to millions of refugees.

Since its inception the Big Heart Foundation has provided life-saving medical services to over 365,000 Syrian refugees and gave more than 400,000 others vital food and financial aid. During the colder winter months in Syria and its neighbouring countries of Jordan, Iraq, Turkey and Lebanon the foundation provided basic essentials to children and their families such as warm shelters, blankets and clothing.