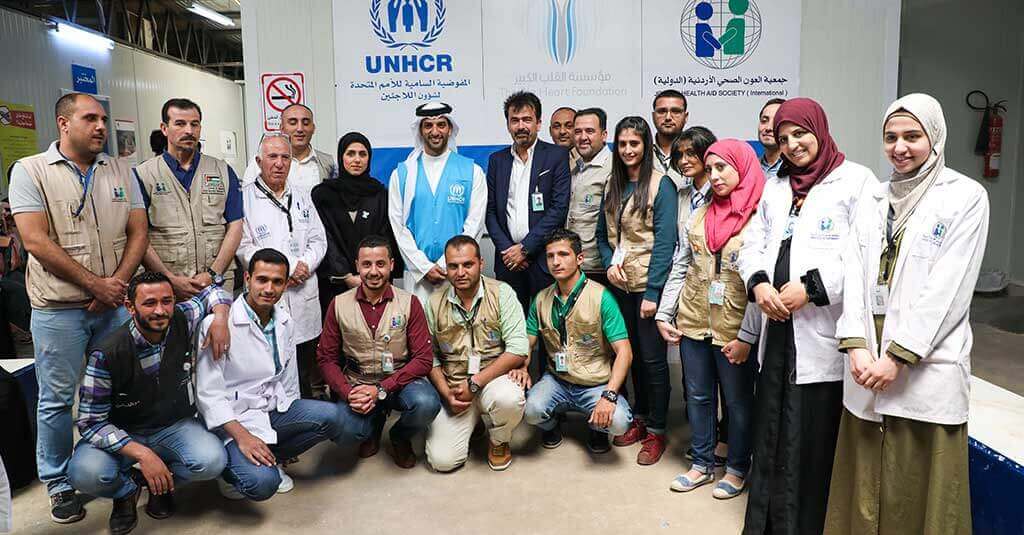 As the people of Syria endure the nation’s seventh year of destruction and devastation, The Big Heart Foundation (TBHF) is continuing its programme of launching humanitarian campaigns and health, social and educational initiatives to support the country’s refugees.

TBHF – a Sharjah-based global humanitarian organisation dedicated to helping refugees and people in need worldwide – has announced that AED30 million worth of health and service projects were implemented in Jordan’s Zaatari Camp from 2013-2016.

The announcement was made during a visit to the camp by representatives from Emirati newspapers organised by TBHF to introduce them to its efforts that aim to improve the humanitarian conditions of Syrian refugees, as well as to acquaint them with the services provided by the TBHF Clinic that was opened in 2015.

According to United Nations High Commissioner for Refugees (UNHCR)’s statistics, there are more than 637,000 Syrians living in Jordan, including 135,000 refugees in the Zaatari and Azraq camps. With 80,000 living under severe conditions in the Zaatari camp, the need for healthcare services is greater than ever.

From July to December 2016, TBHF provided 108,000 primary health consultations for Syrian refugees in the Zaatari Camp – 168% of its original target. Nutrition goals were set at helping 8,000 displaced Syrian refugees and the figure achieved was 13,000 – a 171% increase. Reproductive healthcare more than doubled its target, with 24,500 people receiving consultations.

Under the supervision of the Jordan Health Aid Society, patients are treated at The Big Heart Foundation Clinic 24-hours a day, seven days a week. Construction of the facility was made possible through a generous donation from The Big Heart Foundation in 2013 and the centre is equipped to treat issues ranging from acute and chronic conditions to ante-natal and post-natal care. The round-the-clock healthcare at the clinic is provided by general practitioners, nurses, internists, pharmacists, lab technicians and other medical professionals.

As the crisis of displaced persons from Syria continues, TBHF has maintained its drive to distribute essential funds through its various initiatives and campaigns.

“In line with the directives of Her Highness Sheikha Jawaher bint Mohammed Al Qasimi, wife of His Highness the Ruler of Sharjah and Chairperson of TBHF, the foundation is dedicated to lending a helping hand to refugees and people worldwide who are suffering physically and psychologically, with a focus on Syrian refugees who are in need of aid and support,” said Mariam Al Hammadi, Director of The Big Heart Foundation.

Al Hammadi noted that the Zaatari clinic is an excellent medical facility to provide health services to those most in need. It has so far succeeded in saving the lives of thousands of displaced persons who have suffered from a variety illnesses and disease, some of which resulted from the hardships they have been though while seeking refuge.

Al Hammadi pointed out that more than half of the refugees in the Zaatari camp are children and said that it is vital that they receive the necessary medical care as early as possible. She highlighted that many children at the camp have experienced acute psychological difficulties due to bereavement and trauma.

The Zaatari health centre also helps to provide child growth monitoring, with children aged six months to five years old identified as malnourished being referred for appropriate treatment. There is also health education for mothers and caregivers on baby and infant feeding.

Further information about TBHF can be found on the foundation’s website: http://tbhf.ae.

In June 2015, Her Highness Sheikha Jawaher Bint Mohammed Al Qasimi launched The Big Heart Foundation to coincide with World Refugee Day. It followed her decision to transform what was then The Big Heart Campaign into a global humanitarian foundation. The move aimed to redouble efforts to help refugees and people in need worldwide, with the new foundation adding significantly to the UAE’s rich portfolio and long record of humanitarian initiatives, regionally and globally.